Former Olympic gymnast Shawn Johnson, 28, has another baby on the way!

On Friday, Shawn announced that she is expecting her second child with husband Andrew East, 29.

Along with a pic of her growing baby bump, Shawn wrote, “Here we go again.”

The post also included a pic of their daughter Drew Hazel, 14 months, holding a pair of baby shoes.

Andrew posted a video of himself kissing Shawn’s baby bump with Ciara’s song “Level Up” playing.

In a YouTube video, the couple opened up about their pregnancy journey. While Shawn revealed that it took some time to get pregnant the first time, Andrew joked that it took “about two minutes” this time after getting the clear from doctors to start trying.

After taking a pregnancy test and getting a positive, Shawn broke the news to Andrew, who was on a phone call in the basement, where he works out.

After hearing the news, Andrew said with a smile on his face, “I freakin’ knew you were [pregnant].”

Johnson released that she had been “pregnant for two months.”

Andrew gushed, “Now, I'm having so much fun with Drew, that I'm excited for a second one. I want to have as many kids as possible." 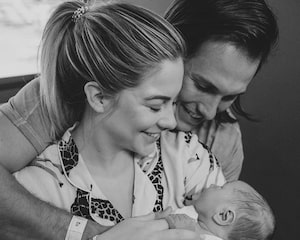 The pair wanted to celebrate the news with their family and friends, but Andrew got some unexpected news… he tested positive for COVID-19. He said, “We were in this time of celebration, and we wanted to tell her parents and her friends. But then I ended up having to freakin' self-isolate for 10 days."

At the end of the video, the pair revealed that baby East is coming in the summer.