Ariana Grande is ready to take the next step with boyfriend Dalton Gomez, and as for timing, how about, "forever n then some"?

On Sunday, the superstar singer announced her engagement to the luxury realtor with a series of Instagram snaps showing the couple snuggling and showing Ariana flashing a unique engagement ring — a big diamond with a pearl.

The "7 Rings" hitmaker went public with Gomez in June, also via Instagram. They have reportedly dated for just nine months. 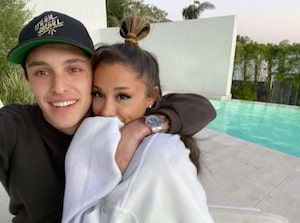 Grande had previously been engaged to "SNL" comic Pete Davidson from June-October 2018, and had a high-profile relationship with the late Mac Miller.

The two had been quarantining together at the time their relationship first sparked rumors. Grande shared a huggy-kissy video of herself with Gomez in August, wishing him a happy birthday with the caption, "hbd to my baby my best friend my fav part of all the days :) i love u."