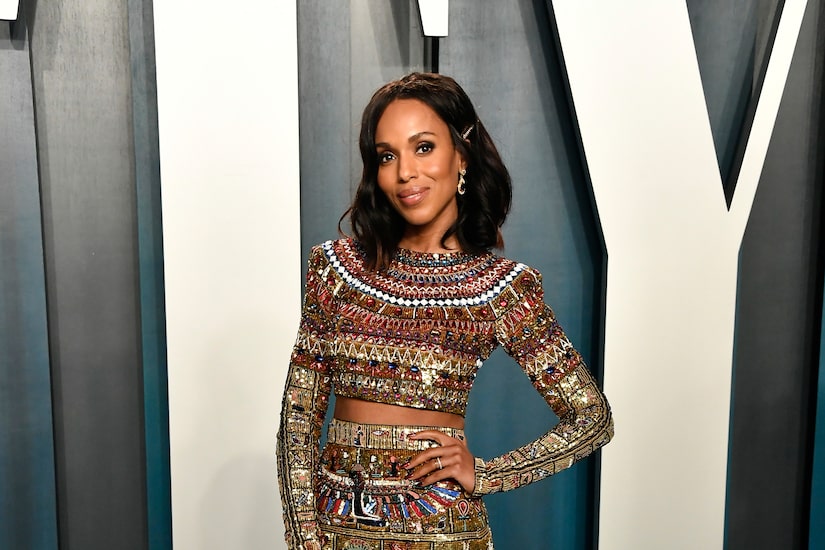 “Extra’s” Cheslie Kryst spoke with Kerry Washington, who dished on her new film “The Prom,” her life under quarantine, and the presidential election.

Joined by her “The Prom” co-star Ariana Debose, Kerry shared of how she is spending her days, “I'm good. I'm in a corner of my bedroom that's become my home office just, like, working, producing, developing, getting ready to shoot, and parenting, supervising Zoom school — doing all the stuff we're doing in COVID.”

When Cheslie noticed some art work, she asked, “Are these drawings a product of at-home schooling?” Kerry responded, “They are, and my kids get such a kick if we're going through the channels and see Mommy being interviewed — they're the real stars.”

Kerry and husband Nnamdi Asomugha have two children, Isabelle and Caleb, and the whole family campaigned for President-elect Joe Biden. Kerry shared how happy they are with the election’s outcome, saying, “It’s really thrilling that so many people came out and voted, that people really understood in greater numbers than ever before how much their voice and their vote truly matters in this process. And I am very happy that we're moving into having a new administration that believes in inclusivity, that believes in acceptance, particularly as it relates to this film that believes in the humanity of the LGBTQ community.”

As for how her family celebrated the big win, Kerry revealed, “We let the kids have ice cream for breakfast and they were like, 'We get ice cream!’ And I was like, '…and democracy.’ So that was it.”

“The Prom,” based on the Broadway musical about actors rallying behind a small-town teen who wants to go to the prom with her girlfriend, is packed with stars, including Meryl Streep, Nicole Kidman, James Corden and Andrew Rannells.

Kerry dished, “It was so fun! You have all these incredibly experienced artists, whether it's Meryl who's been nominated for as many Oscars as we have fingers and toes to Ariana who has spent a decade onstage.”

Ariana is thrilled to be a part of the movie, too, saying, “I'm a woman. I'm queer. I'm Black... Afro-Latina. Getting to do this movie, and finally having that inclusive prom… that was the ultimate full circle.”

What was Kerry’s own prom night like? She reflected, “I went with my then-boyfriend who was, at the time, the love of my life. We had an amazing evening. And I'm sure I lied to my parents about where we went after prom. I designed my own dress.”

“The Prom” streams on Netflix December 11.