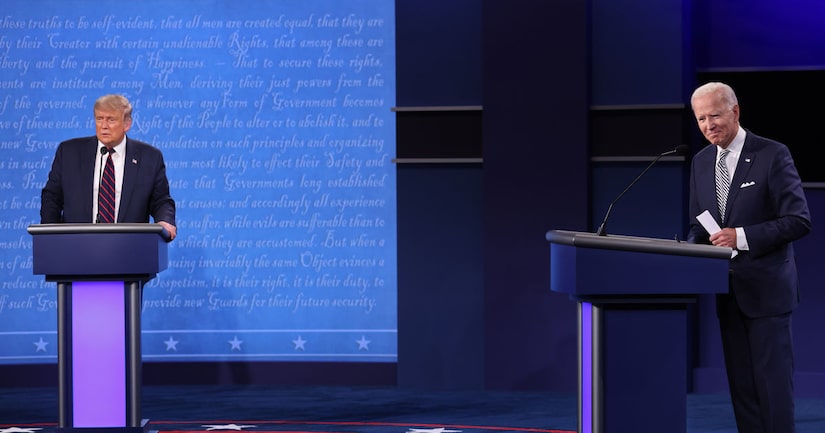 With the state of America hanging in the balance, many big names took to social media to share their reactions to the presidential election, which has not been decided.

Mail-in ballots are currently still being counted in several states that have yet been called for either candidate, including Nevada, Georgia, Pennsylvania, North Carolina, and Michigan.

One thing is clear: Kanye West did not emerge the winner after entering the presidential race late in the game. People reports the rapper did garner about 60,000 votes in the 12 states where he did appear on the ballot. West hinted he will run again, dropping a "KANYE 2024" tweet.

Meanwhile, much of Hollywood has expressed their disapproval of President Trump, who declared victory before the race was called.

“We will be going to the U.S. Supreme Court. We want all voting to stop,” Trump went on. “We don't want them to find any ballots at 4 o'clock in the morning and add them to the list. Okay? It's a very sad, it's a very sad moment. To me, this is a very sad moment, and we will win this, and as far as I'm concerned, we already have won it.”

Team Trump is suing to stop the vote from being counting in Michigan, where he trails Joe Biden.

Team Biden pushed back in a Facebook Live press conference on Wednesday, with his campaign manager Jen O'Malley Dixon asserting that Biden currently leads in enough states to win the 270 electoral votes needed to claim victory. She said she expects Biden to speak sometime today, after more states are called.

Noting that absentee votes may not be counted until later this week, “The Avengers” star Mark Ruffalo tweeted, “Take a deep breath folks. Remember the #RedMirage we won't know in important states tonight.”

Chrissy Teigen tweeted, “It's insane what our fears are if we lose, compared to their fears if Biden wins. like we will prob all die or be handmaids and they're worried about bathroom safety.”

Elizabeth Banks wrote on Twitter, “I'm just pacing back and forth. At least I'm burning off the gallon of ice cream I just ate. #ElectionNight.”

Patton Oswalt tweeted, “God, I love the first night of Election Week. So festive. We broke out the traditional stress ball garlands and I'm going to carve the Xanax in about 20 minutes.”

Kind of terribly sad how close this election was. After this year and especially this summer it should've been a landslide. I don't get it. Truly.

What time is it? It feels like a million o'clock

We all pay our taxes. Our Vote is our sacred and Nationally protected right. #CountEveryVote

As voters, we turned out in record numbers, despite a pandemic, an economic collapse, and attempts to stop us. Now we're going to make sure that every vote counts. #EveryVoteCounts #DemocracyRising #CountEveryVote

Mail in ballots are not a “surprise” they're ballots. They're votes. And they need to be counted. #CountEveryVote https://t.co/JiLB2G6eK6