Jake Hoot is getting married!

People reports “The Voice” winner planned to surprise his girlfriend Brittney Nicole Hoyt with a proposal on Sept. 20 while the couple was visiting her hometown of Phoenix.

Her family and his mom were present as he got down on one knee. Jake explained, “I knew how important being around family was to Britt, and with her birthday coming up, I knew it would be the perfect time to do it! She’s one of seven, so arranging everyone to fly in and it still be a surprise was tough, but we all coordinated how it would happen, and it went off without a hitch!”

Hoyt quickly caught on to the surprise. Hoot said, “She lost it! I had to keep her moving forward because she was crying and trying to fall down on me! Then after I popped the question, we were both so emotional that I almost had to wrestle her arm to put the ring on her hand!”

Brittney, a labor and delivery nurse, called her new bling “my dream ring.”

She described it as “a striking oval diamond with small, dainty diamonds all around the band. It’s more than I could’ve ever dreamed of.”

The pair met seven years ago as wedding singers at a friend’s nuptials and reconnected on mission trips in Nicaragua.

Jake shot to fame in 2019 as the Season 17 winner of “The Voice.” Hoot was a member of Kelly Clarkson’s team. 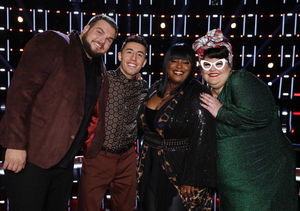 'The Voice' Crowns a Winner!

Rosie O’Donnell on Her Past BF and How Madonna Reacted! Plus, She… 9