Jordyn Woods has a lot to celebrate in life, including a new movie and her new relationship with Minnesota Timberwolves basketball star Karl-Anthony Towns.

In her leading role in BET's "Trigger," Jordyn plays Vanessa, a woman hosting a dinner party that goes very wrong. Woods revealed to “Extra's” Rachel Lindsay, “I dipped my foot into acting a little bit with being on 'Grown-ish' and being in the first movie I did with Paula Patton called 'Sacrifice'... and the same director, Chris Stokes, asked me if I would like to have a role in 'Trigger'... He was like, 'I would like to give you the leading role.'”

“It was nice being in a thriller… Vanessa's also very much like me — she's a boss,” Jordyn commented. “Why not play a boss leading lady?”

Jordyn recently made it Instagram official with Towns, posting a few loved-up beach shots on Instagram with the caption, “I found you, then I found me.”

She told Lindsay, “Yeah, people were getting on me about the caption, but I just think that when you find the right one, you can learn even more about yourself… It's about learning to evolve with someone. The right person will bring a lot out of you. We have been friends for a long time. Naturally, we both connected about losing a parent at a very young age… so it was a very organic relationship that we'd been best friends for a while.”

Towns was with Woods as she celebrated her 23rd birthday in Mexico with a Michael Jordan theme. “This is my golden year, my birthday is on the 23rd. I have a 23 tattoo, I'm also 'Jordyn' so 23 to me is as big as 30 to some people… and I was not going to let the pandemic stop me, so I really just kept it to a small group, friends and family… and we just had a good time, celebrated, horseback riding, ATVing. We went on this huge yacht — that was insane.”

She added, “It was just all positive vibes, no drama, which is amazing for me.” 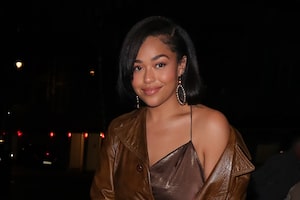 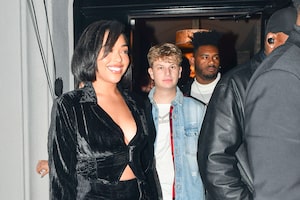