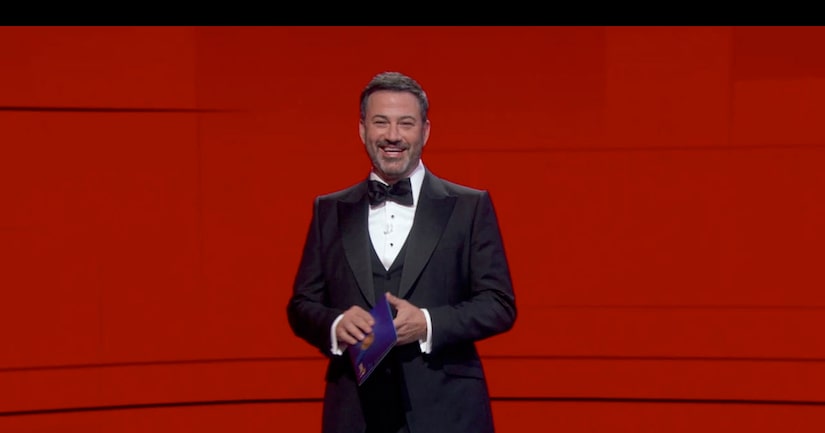 The 2020 Emmys were full of surprises, history-making moments, and more.

The show kicked off like any other year, with host Jimmy Kimmel greeting a room filled with stars. In reality, however, it was just old footage from past shows!

Jimmy soon revealed a studio of cardboard cut-outs, the actual stars were watching via Zoom!

The show did have a series of in-person presenters, starting with Jennifer Aniston.

Unfortunately, they had to “burn off” all the germs on the presenters' card. The paper went up in flames and had to be dropped into a garbage can, and Jen had to grab a fire extinguisher to put it out! 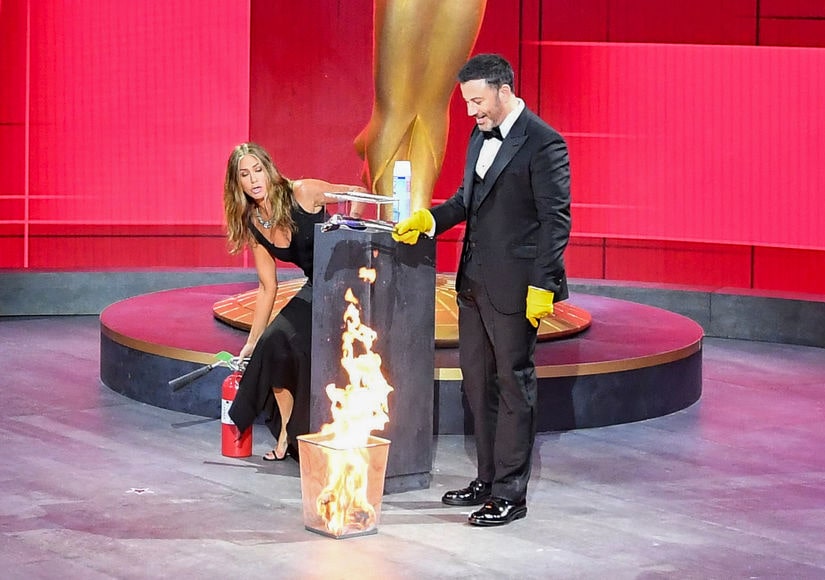 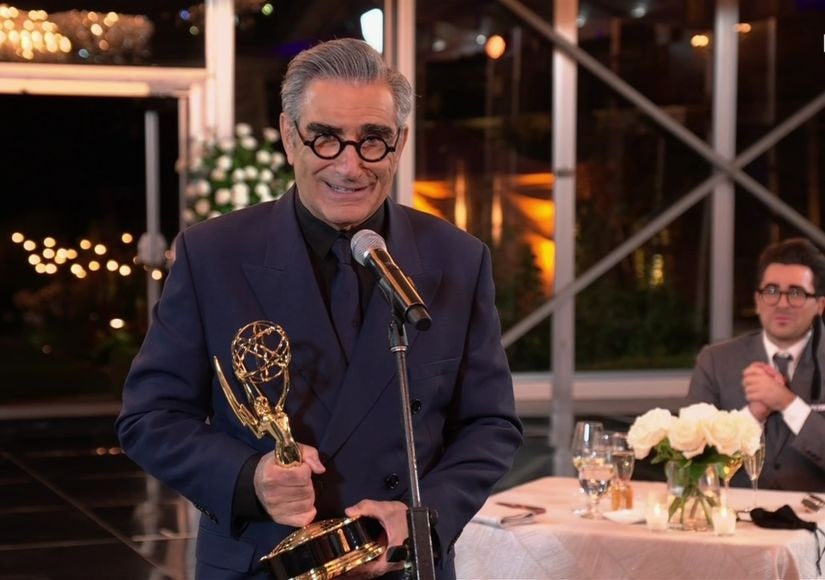 The sweep started on Saturday at the Creative Arts Emmys, as the show nabbed Outstanding Casting for a Comedy Series and Outstanding Contemporary Costumes.

There were other surprises, too, like David Letterman presenting Outstanding Variety Talk Series. The video clip showed the former late-night titan dropped off in the middle of nowhere, claiming to be wearing the same tux he wore when he hosted the Emmys in 1986.

Conveniently, he found a list of old jokes in the pocket and there were some zingers, like this one: “What a great-looking crowd, so many stars, so much cocaine. Is this the Emmys or the Mets locker room?”

In another Emmy first, the winner of the category, John Oliver, was treated to an Emmy that popped out of a box!

Meanwhile, nominees Reese Witherspoon and Kerry Washington met up with friends for an outdoor viewing party… that doubled as a New Year's celebration! Decked out in 2021 glasses and hats and armed with champagne, Reese told Jimmy, “We are ready for this year to be over.” As they counted down to the New Year, she added, “Who even knows what day it is?”

The Emmys also gave fans an inside look at what the stars have been up to at home during the pandemic, like Chris Harrison trimming roses and Tatiana Maslany making wine in her toilet. The segment ended with David Spade going full “Tiger King” as Joe Exotic behind bars!

Then there was the “Friends” reunion! Jennifer Aniston, Courteney Cox and Lisa Kudrow met up to watch the ceremony, joking with Jimmy that they've been roommates since 1994. They even had a Zoom crasher… Jason Bateman!

On a more serious note, Emmy winners Regina King and Uzo Aduba both wore Breonna Taylor shirts to honor the 26-year-old who was shot to death by police earlier this year. Anthony Anderson also gave a speech about Black Lives Matter, saying, “This was supposed to be the Blackest Emmys ever… but because of COVID, we couldn't even get into the building… This isn't what it should have been, but I'm still rooting for everybody Black because Black stories, Black performances, and Black Lives Matter!”

.@AnthonyAnderson was looking forward to the blackest #Emmys ever… #BlackLivesMatter pic.twitter.com/HFcTp1OfHR

Tyler Perry also gave a moving speech as he accepted the Governors Award. Recalling how his grandmother gave him a quilt she'd made when he was 19 years old, he said that he initially saw no value in it. Years later, he came across a similar quilt in a shop and learned something that gave him some perspective. “It was made by an African-American woman who was a former slave," he discovered, "and each patch in the quilt she had put in represented a part of her life."

He went on, "As I was hearing this story, I became so embarrassed. Here I was a person who prized myself on celebrating our heritage, our culture, and I didn't even recognize the value in my grandmother's quilt. I dismissed her work and her story because it didn't look like what I thought it should... We are all sewing our own quilts with our thoughts and our behaviors and our experiences and our memories."

Relating it to a childhood memory, he said his mother once told him, “Don't you ever stand by a door waiting for white folks to do nothing for you.” 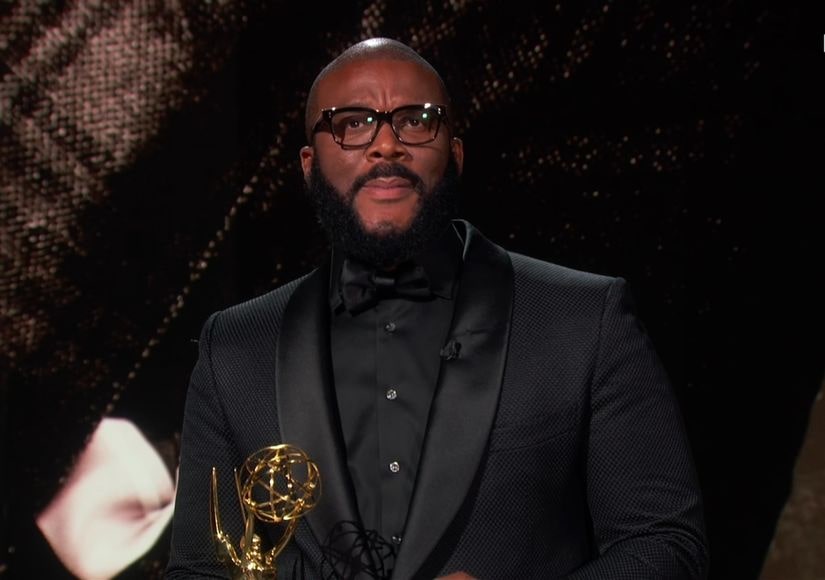 He explained, "My mother wasn't a racist, but in her quilt... she couldn't imagine me actually building my own door and holding that door open for thousands of people. In my mother's quilt, she couldn't imagine me owning land that was once a Confederate Army base where Confederate soldiers planned about how to keep Blacks enslaved. And now Black people, white people, gay, straight, lesbian, transgender, ex-cons, Latin, Asian, all of us working, coming together to add patches to a quilt that is as diverse as it can be. Diversity at its best." 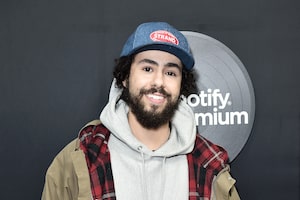 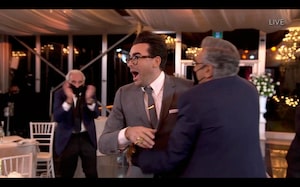 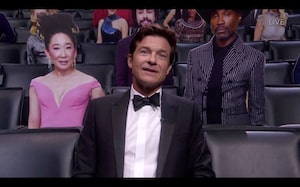