Sharing a 📸 taken by The Duchess ahead of Prince George's seventh birthday tomorrow! 🎈 pic.twitter.com/GLPBoVsuYZ

In honor of his birthday, George's royal parents Prince Williams and Kate Middleton shared some new photos of him!

In a statement, Kensington Palace announced, “The Duke and Duchess of Cambridge are delighted to share two new photographs of Prince George ahead of his seventh birthday tomorrow.”

Thank you everyone for your very kind wishes on Prince George's birthday today! 🎂 🎈 pic.twitter.com/L7dQDtQfaN

In one photo, George wears a camouflage tee while enjoying the green outdoors. In another pic, he is seen flashing a smile in a dark green polo and pants.

The snaps were taken by Kate, who recently joked about George and his siblings' appetites. She told BBC Breakfast, “My children have bottomless pits. I feel like a constant feeding machine."

One of George's godparents, Julia Samuel, recently opened up about his developing personality. Julia, who was a close friend of George's late grandmother Princess Diana, shared in an interview with the podcast “How to Fail with Elizabeth Day,” “He's funny and feisty and cheeky and God, she [Diana] would have loved him so much.”

“I do to George what [Diana] did to us, which is give impossible toys that are really noisy and take a lot of making," Julia revealed about her birthday gifts to the little royal. "I come in slightly tipped by the size of the present that William then has to spend days putting together. And then put all the machinery together, and it makes awful tooting noises and lights flashing and all of that. That makes me laugh, and it makes George laugh.” 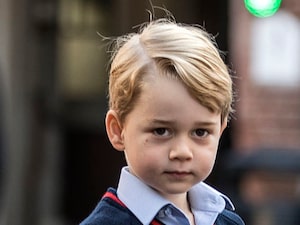 Kate and William have made it an annual tradition to release photos of George on his birthday.