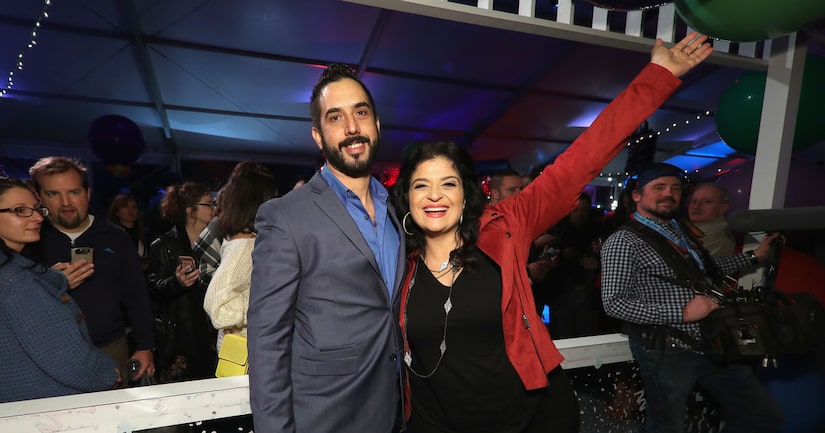 “Chopped” judge Alex Guarnaschelli, 48, and her boyfriend Michael Castellon are taking their relationship to the next level!

Over the weekend, Alex announced that she was engaged to Castellon after four years of dating.

Castellon, who won “Chopped” on Season 35, popped the question on Guarnaschelli's birthday. She revealed it happened when he pulled the car over after a grocery run, claiming to see a baby deer. She told People magazine, “So he's like, 'Shh. Come see it. It's so cute.' And I'm like, 'We're going to have to do something. We're going to have to call the animal welfare.' I'm already rolodexing the situation… And he goes, 'There's no deer.' I turn, and I look and he's on one knee. And he said, 'There's no deer.' He's like, 'This is why I have to marry you because you just believe me every time.' He said, 'Will you marry me?' and he gave me the ring."

Alex reiterated about their relationship, “It's funny, I think one of the reasons why we're a couple, we've been together for four years, is because he'll tell me anything and I'll believe him.”

Four years ago, Alex and Michael met when she ate dinner at a restaurant where he was working. She shared, “I was out to dinner with a friend, and at a restaurant, and I knew the waiter, and I was eating dinner and I said, 'This steak is just so good.' And the waiter, my friend, said, 'Oh, my God, my best friend is the cook, the chef, here. He's amazing. You got to meet him.'"

“I went in to meet him and tell him the steak was delicious and that was it,” Guarnaschelli went on.

On Sunday, Alex posted a pic of her emerald-green engagement ring, which is an heirloom.

On the same day, which happened to be Father's Day, Alex paid tribute to her dad. She wrote on Instagram Story, “I lost my dad almost two years ago. He would've liked to see this. @chefmike808 said he would've asked permission. I don't know if my dad would've ever said ok to anyone. He would be proud of @chefmike808 asking. Just miss my dad is all. We all experience loss and this is a joyous moment I share with my dad's memory.”

Since her father passed, Castellon did speak about marrying to her one day to her daughter Ava, 12. She recalled to People, “I said, 'He asked me to marry him.' And she goes, 'All right. I mean, I guess you can, Mom.'”

The couple are in “no rush” to marry amid the COVID-19 pandemic, but she has an idea of what she wants! She dished, “I want to have a blowout. I want a tri-state rager.”

Guarnaschelli was previously marred to Brandon Clark, but they ended their marriage in 2015 after eight years.