On Wednesday, the pair welcomed their second child, a baby boy who they named Hayes.

“He's so perfect. He looks just like his big sister Gracie. We're in this together. You and me, baby Hayes!” the couple told People magazine about their bundle of joy, who weighed 9 lbs., 4 oz. and measured 21 inches.

Doug explained why they opted for a home birth, saying, “The fact that I may or may not be able to be a support person at the delivery in the hospital [and] what do we do with our daughter if I can't leave the hospital? At least with our house, we know it's a more controlled environment."

Referring to the COVID-19 pandemic, Jamie added, “What if my baby contracts [the virus] and he's stuck in a hospital in the midst of this pandemic?… It was just a nightmare."

Last month, Jamie revealed the special reason why they were naming their son Hayes. She shared, “We really like the idea of having H names, but when I found my father through a DNA test (after not knowing him for my whole life) I wanted to honor my dad in some way. I never got the chance to meet him — I found him just a couple months after he passed."

Otis announced that she was expecting in September. At the time, she told People, “Doug instantly cried tears of joy. Our first baby was a boy, but we lost him at 17 weeks. Of course he loves our daughter, but he's wanted a baby boy so badly for so long. This is truly an answered prayer for us.” 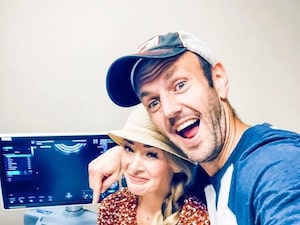 In 2019, Otis suffered a miscarriage and the year before, she had a chemical pregnancy.