On Tuesday night, singer Adele had everyone talking after she posted a rare photo of herself on her 32nd birthday!

Putting her dramatic weight loss on display, Adele wrote on Instagram, “Thank you for the birthday love. I hope you're all staying safe and sane during this crazy time.”

Adele also acknowledged the heroes during the COVID-19 pandemic. She added, “I'd like to thank all of our first responders and essential workers who are keeping us safe while risking their lives! You are truly our angels ♥️ 2020 okay bye thanks x.”

Chrissy Teigen was just one of the famous names to share their reaction to the pic. She wrote, “I mean are you kidding me.”

It was the first time Adele had posted on Instagram since December.

Lauren Paul also posted a photo of a slimmed-down Adele in honor of her birthday. She wrote, “Happy birthday angel babe @adele. You came into my life a few months before I had Story and you quickly became one of the most important figures in my journey as a new mother. You have taught me so much. You glow because your heart is full. I'm so proud of the human you are.”

She added, “Wish we were reliving this Vegas sleepover.”

Earlier this year, Adele was seen wearing form-fitting activewear, which accentuated her figure. According to E! News, Adele was getting into the best shape ever by attending private workout sessions several times a week without anyone noticing.

A source shared, “She goes to different gyms. She goes early in the morning and meets with her trainer. She gets her workout in first thing. She works out for about an hour and leaves drenched in sweat and looking like she worked very hard.” 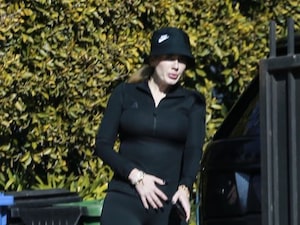 Another insider added, “She's also staying active going on walks and getting in a lot of steps. She is in a groove. She looks great and has totally transformed her body. She is barely recognizable and is continuing to lose weight.”

That outing came just a day before she flaunted her tiny waist at two Oscar parties. A source told “E! News,” “Everyone was like, 'Is that Adele?!' She wore a gold dress with tassels. It was a very '60s mod look with her hair and makeup. She looked incredible.”

In January, the “Hello” hitmaker showed off her weight loss while on vacation in Anguilla with Harry Styles and James Corden. During the stay, she chatted with lucky fan Lexi Larson, saying she lost “something like 100 pounds.”

Reports claim Adele is on the Sirtfood Diet, which focuses on foods that increase certain proteins in the body that regulate the metabolism, inflammation, and more. Billy also heard you can still have red wine, coffee, and chocolate on the diet.

Camila said, “Absolutely… You are allowed to do that in moderation.”