“The Real” host Jeannie Mai, 41, and rapper Jeezy, 42, are taking their relationship to the next level!

People reports Jeezy popped the question at his Los Angeles home on March 27, where they are quarantined during the COVID-19 crisis.

Mai's rep told the magazine, “Jeannie and Jay were set for a trip to Vietnam this April. What Jeannie didn't know is that Jay was planning to propose. Instead, Jay decided to bring Vietnam to Jeannie with a surprise quarantine date night in his home filled with Vietnamese food and decor.”

A few months ago, Mai opened up on their romance, telling the outlet, “We both went through enough in our life to connect on the understanding that love should feel safe, honest, and pure. Immediately that was a magnetic attraction. We are very attracted to each other's passions to serve. So because we have a mutual joy of having purpose, we're going to find a way to do that together.”

In November, the couple spent Thanksgiving together for the first time in Atlanta, where she connected with his extended family. On an episode of “The Real,” she shared, “It was so wonderful to meet his family and be able to spend time together. It was special.”

Jeannie and Jeezy first sparked dating rumors in January 2019 after Malika Haqq posted a photo of them together during a hangout with Trey Songz and Lori Harvey.

Before they became Instagram official in September, they kept their romance on the down-low for a while. A source told People magazine, “Jeannie and Jeezy have been dating for about one year and they are very happy. He has been a recurring guest on 'The Real.' They are both extremely dedicated to serving their communities and strongly support each other's careers and passions.” 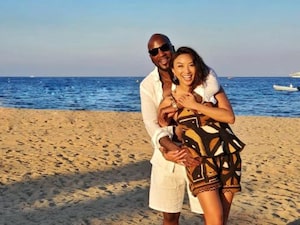