Comedian Kathy Griffin, 59, has been admitted to an “isolation ward room” after experiencing COVID-19 symptoms.

On Wednesday, Kathy posted a pic from her hospital room. She wrote on Instagram, “I was sent to the #COVID19 isolation ward room in a major hospital ER from a separate urgent care facility after showing UNBEARABLY PAINFUL symptoms. The hospital couldn't test me for #coronavirus because of CDC (Pence task force) restrictions. #TESTTESTTEST.”

Griffin also called out President Trump, writing, “He's lying.” She was referring to his recent tweet, “Just reported that the United States has done far more 'testing' than any other nation, by far! In fact, over an eight day span, the United States now does more testing than what South Korea (which has been a very successful tester) does over an eight week span. Great job!”

The actual numbers reveal the far larger U.S. tested over 40,000 fewer people in an eight-day span.

Kathy's hospitalization comes on the heels of her mom's passing. Due to the coronavirus pandemic, she has not been able to hold a funeral for her mom, who died at the age of 99 after suffering dementia. Last week, Kathy tweeted, “I know there are many of you dealing with this surreal problem. I don't know how to memorialize Maggie yet. Privately grieving, of course. A virtual memorial? Not sure if that would suit Ms Maggie. Still open to it. Everything is changing so fast. I'm so grateful to you guys.”

While the coronavirus death toll has surpassed 20,000 worldwide — among them at least 1,000 in the U.S. — leading to strict social distancing guidelines, most who become ill recover over time.

Over the weekend, Tom Hanks revealed that he and wife Rita Wilson are feeling better after their diagnosis. He tweeted, “Hey, folks. Two weeks after our first symptoms and we feel better.”

Rita was well enough to rap while they remained quarantined in Australia. She posted a video of herself rapping Naughty by Nature's hit song “Hip Hop Hooray,” captioning the post, “Quarantine Stir Crazy.” 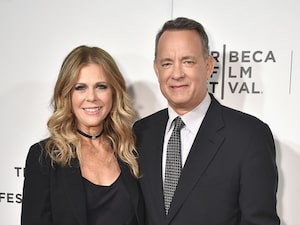 Rita and Tom aren't the only ones improving — actress Olga Kurylenko is also “completely recovered.” Over the weekend, she shared on Instagram, “For one week I felt pretty bad and was mostly in bed, sleeping, with high fever and strong headache. The second week, the fever was gone but some light cough appeared and I felt very tired. By the end of the second week I felt totally fine. Cough is almost gone although I still cough in the mornings but then it completely goes away for the day! I'm fine!”

Just days after revealing his positive test, Daniel Dae Kim is “back to normal.” Crediting the effects of hydroxychloroquine, he said in an Instagram video on Saturday, "Yes, this is the drug that the President mentioned the other day. It is also the drug that Dr. Anthony Fauci cautioned us about. He said that evidence that the drug was promising is anecdotal, and that is correct. It means it wasn't studied, and it's only based on personal accounts. Well, add my name to those personal accounts, because I am feeling better.”

Kim also revealed that he was taking Tamiflu and using both a Z-pack and an inhaler to aid in his recovery.