Nearly a year after calling it quits with ex-husband Skylar Astin, “Pitch Perfect” star Anna Camp, 37, has a new man!

On Monday, Camp went public with her relationship with drummer Michael Johnson. She shared a photo from Joshua Tree, writing on Instagram, “In the middle of nowhere with no one I'd rather be with.”

It looks like they have been away in Joshua Tree since Friday. She also posted another photo of “Quarantini” drinks on her Instagram Story, tagging him.

It is unknown how long they have been dating, but it seems like her BFF Brittany Snow — who dated Johnson for over three years until they ended things in 2007 — already approves; Brittany and husband Tyler Stanaland are also following Michael on his private Instagram page.

Anna and Skylar finalized their divorce in August. According to documents obtained by Us Weekly, the pair waived rights to spousal support and will split the rights to their L.A. home.

Last year, Camp and Astin announced their separation with a statement to People. They explained, “We can confirm that we have decided to separate, and this decision was made mutually and amicably. We kindly ask for privacy as we navigate this transition.” 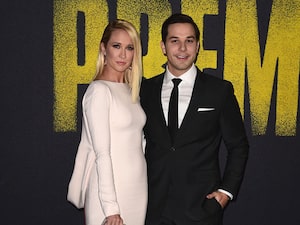 During the TV Critics' Association summer press tour, she told Us Weekly, “I think only recently, am I now actually finding me as Anna, which has been really exciting in my life… I'm 36 years old, I've had some life changes go on. And I feel more me than I ever, ever have. So, it's a vulnerable place to be, but it's also very empowering. I just feel really grounded in the decisions that I've been making I have been for the best.”

The pair started dating in 2013, following her divorce from Michael Mosley. They tied the knot in fall 2016 in California.