Model and actress Paulina Porizkova is looking as hot as ever in her 50s.

Porizkova took to Instagram to show off her sexy figure while rocking a black bikini during a recent vacation in Costa Rica. She captioned the pic, “And at the end of the dusty road is this - a beautiful waterfall. And you cool down and wash the dust off. And then get back on the ATV for some more adventures and dirt. Photo Teadora Roma.”

Paulina also posted another photo of herself lounging in a bikini while acknowledging the coronavirus pandemic. Along with a side-by-side photo of herself in front of a computer, she wrote, “Hello reality. Can't keep posting vacation when the present is is so pressing. When I was little and lived in a communist country, it was a common occurrence to have shortages. Not necessarily because there were actual shortage, but because Mrs Prdelkova told everyone she knew that she 'heard' there was going to be a shortage of potatoes.”

“And within a few days, there would indeed be a shortage of potatoes in all our local stores. When a collection of people panic and all rational thought is lost, we lose our sense of being human,” Porizkova added. “We stampede all over one another in order to survive. This frightens me more than any epidemic. But to be clear, I also believe that staying at home - and out of public places when possible - is necessary, so at the very least we can all get sick at different times and not to overwhelm the medical systems.”

During her Costa Rica vacation, Paulina also went topless in another photo. She shared, “In the midst of this sad weather and horrible news, allow me to go back in time - only a few days ago... Putting on some pretty pink lingerie to wear under my pretty pink gap dress.”

Paulina is embracing her age. Ahead of her birthday in April, she posted a makeup-free selfie. In January, she explained, “So, this is what I really look like. Not a great photo, early in the morning, no make up no filters, just the real true me. I'll be turning 55 soon. At first glance, I think - ew. I look so old. Grief is certainly no beauty maker. My eyelids are starting to droop. The jowly bits next to my mouth don't only make me look older but also somehow bitter. The gray in my hair is an easy fix, although, honestly, I'd love to just grow it out and stop coloring. Now, how can I help to make all this -what we consider flaws - to be seen differently, to be seen as confidence and beauty of a mature age rather than something that needs to be eliminated?”

In the same interview, Paulina also opened up on her grief after being cut out of her husband Ric Ocasek's will. She admitted, “It made the grieving process really, really tricky. I would love to be able to be sad and miss him and not also feel this incredible hurt and betrayal.” 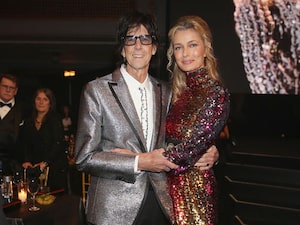 In his most up-to-date will, Ocasek stipulated, "Even if I should die before our divorce is final... Paulina is not entitled to any elective share... because she has abandoned me."

He had signed the will 18 days prior to his passing, which happened at their NYC townhouse while he was on the mend from surgery.

The couple had been married for 30 years and had two sons together.Shortly after Ocasek died, his widow wrote on Instagram, "We still lived together and still filled the family car. Everyone who knew Ric knew that he could be aloof. And not particularly social. But when he decided to turn his focus on you, it was as if the sun came out. His smile and his gaze warmed you and made you feel like the most special person in the world... His death is the end of my world as I knew it."

Now, she intends to contest Ocasek's will in order to receive a portion of the estate's reported $5 million in assets.