In a new interview with E! News, Kim explains why she thinks her youngest son could actually be her dad.

First, she brought up a moment from “Keeping Up with the Kardashians,” saying, “On our show, we showed that we were in Bali, and a woman — a blind medium — came up to me and said that I was gonna have another son and that it was gonna be my father reincarnated."

Kim insisted, "She had no idea. No one knew. No one on my crew knew that I had a surrogate that was pregnant with a boy."

That wasn't the only time someone made similar claims.

She went on to reveal that once when she was out of town, Psalm's nurse asked if she could take him to her friend's baby shower and she agreed.

According to Kim, “She brings him to a baby shower, and a woman comes up to her and said, 'Is this your son?' And she said, 'No, no, no, I'm just watching him.' And she said, 'Well, I just have to tell you, please tell their mom this is a family member of hers reincarnated.'"

More comments have been coming in. "Multiple people that had no idea that was my nanny or anything have come up to my baby to say that he's a family member reincarnated," Kardashian said. "So my whole family, all the time, thinks it's my dad and is just so emotional and close to him."

Psalm also shares a trait with his late grandfather. "He's left-handed, like my dad," she noted. "So, all these things happen. I don't even know if I believe in reincarnation, but I do now. But I want to believe it!"

Robert Kardashian Sr., father of Kim and her siblings Kourtney, Khloé and Rob, passed away in 2003 from esophageal cancer. 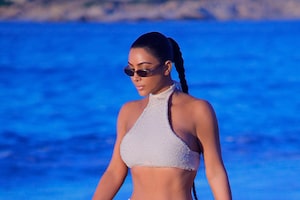 Kim Kardashian Shows Off Her Bikini Body in Mexico 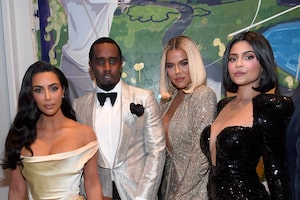 Kim K’s Shocking New Revelations About Her Past Pregnancies, Plus: More Celeb Headlines