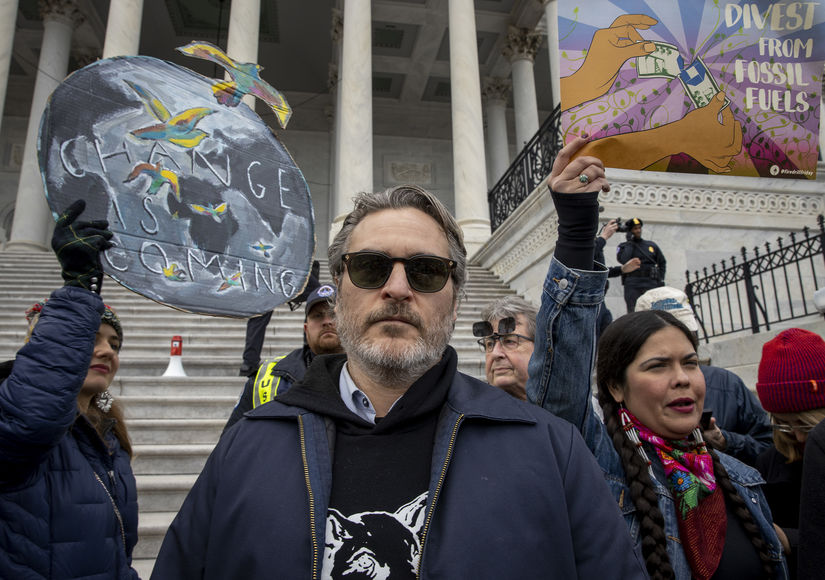 On Friday, Phoenix was under arrest for his participation in Jane Fonda’s last “Fire Drill Friday” protest, Deadline reports.

Before his arrest, Joaquin explained the negative effects of dairy and meat production on climate change. He said at the rally, “Sometimes we wonder what can we do in this fight against climate change, and there is something that you can do today and tomorrow, by making a choice about what you consume. There are things I can’t avoid. I flew a plane here today, or last night rather, but one thing I can do is change my eating habits.”

During his acceptance speech at the Golden Globes on Sunday, Phoenix expressed his approval of the Hollywood Foreign Press for “recognizing and acknowledging the link between animal agriculture and climate change." The meal provided for attendees was, for the first time, vegan. "It’s a very bold move, making tonight plant-based," he continued.

He added, “It’s great to vote, but sometimes we have to take that responsibility on ourselves and make changes and sacrifices in our own lives. I hope that we can do that — we don’t have to take private jets to Palm Springs sometimes or back, please. I’ll try to do better and I hope you will too. Thank you so much for putting up with me. I’m so grateful for this night and all of you, thank you.”

Joaquin is one of many celebrities to be arrested at Jane’s climate protests. Others include Lily Tomlin, Sally Field, Diane Lane, Ted Danson and Rosanna Arquette.

Fonda recently opened up to “Extra’s” Cheslie Kryst about her efforts, insisting, “If we don’t do what’s right, in 11 years the fabric of the environment is going to unravel beyond anything we can control… It’s going to affect every aspect of our lives. We should all be concerned.”