“Today’s” Dylan Dreyer is a mom again for the second time!

One big happy family. 💙 Head to the link in our bio for all the details on little Oliver George. 👶

During an on-air phone call with her “3rd Hour of Today” co-hosts, Dreyer shared, “It was a long time coming. This year started off a lot differently than it ended.”

.@Dylandreyernbc joins us on the phone after welcoming her second son! "I feel so happy and so blessed," she says.

She also tells us how they decided on naming baby no. 2 Oliver. 💙 pic.twitter.com/nOsAn5uyhv

She gushed, “I just want to kiss him every second. Everything just clicked… Everything about it just feels right.”

Dylan and Brian are also the parents of son Calvin, 3, who was beyond excited to be a big brother.

In July, Dylan announced she was expecting. At the time, she shared, “Calvin is so excited. Last night at dinner, he said, 'Can I kiss the baby?' It's the sweetest thing. I don't think he understands exactly what baby is and how much it will change his life."

Dylan and Brian were planning to start IVF in May when they got a surprise call from their doctor. She said, “My doctor calls and says, 'Don't take anything. You're pregnant!' I'm just so happy now. I've been keeping this secret so long.” 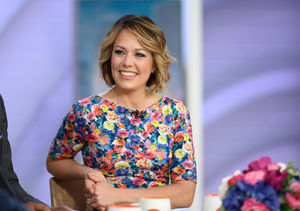 The pregnancy news came just months after Dreyer revealed that she recently suffered a miscarriage. She broke the sad news on the same day that Jenna Bush Hager announced she was expecting her third child on “Today.” Dreyer told Hager, “My sadness does not take away from your joy. I'm not even really sad right now. I'm just in a crappy situation, to be honest with you, and I am hoping it all works out."