“Siesta Key” star Alex Kompothecras has a baby on the way!

There are some people in life that make you laugh a little louder, smile a little bigger and live just a little bit better😋😍 #happybirthday #nashville

Alex’s girlfriend Alyssa Salerno is pregnant with their first child, a baby girl.

On Sunday, Alex announced the big news by posting a pic of himself kissing Alyssa while cradling her baby bump. He wrote on Instagram, “Little princess on the way.”

Little princess on the way😍😍

A few months before the baby announcement, Alex professed his love for Alyssa, writing on Instagram, “Everything I love compiled in one picture🙌🏻❤️🐠#WCW #warsawwednesday #offshorefishing.”

The news comes just weeks before “Siesta Key” returns for its third season on MTV.

Alex’s relationship with Alyssa will be one of the plotlines in the season, which premieres January 7. 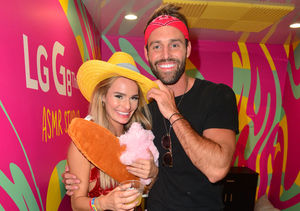 Kompothecras previously dated fellow “Siesta Key” castmate Juliette Porter, but they called it quits in Season 2. Earlier this year, she told Us Weekly, “We’ve been on and off for a long time. We went back and forth a lot. I broke up with him in October for about a month; it was a toxic relationship. We tried again until about a month ago. After that, I was like, ‘We just have to rip the Band-Aid off.’”