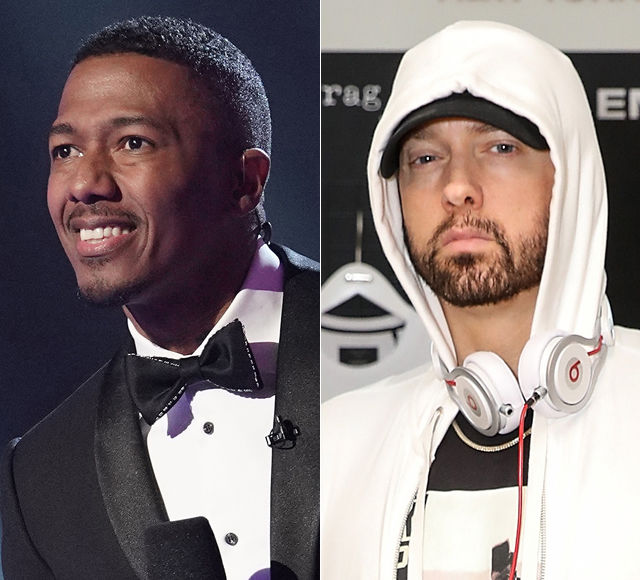 Nick Cannon is clapping back at Eminem, who recently dissed Mariah Carey in his latest song with Fat Joe.

In the song, Eminem claimed that Carey had Cannon “neutered.” He raps, “I know me and Mariah didn’t end on a high note / But that other dude’s whipped — that p— got him neutered / Tried to tell him this chick’s a nut job before he got his jewels clipped/ Almost got my caboose kicked / Fool, quit / You not gonna do sh— / I let her chop my balls off, too, before I lose to you, Nick.”

Over the weekend, Cannon complimented Fat Joe on the album, but took a dig at Eminem. He wrote on Instagram, “@FatJoe album is 🔥🔥🔥🔥 Star studded, he even did some charity work and dug @Eminem out his grave I mean cave!! LOL FLAM FLAM! BLAM BLAM! NICK CANNON!! Bring your Ass to @MTVWILDNOUT to Battle like a real legend Grandpa Marshall!!”

On Monday, Cannon took it one step further, releasing his own diss track about Eminem. In the song, entitled “The Invitation,” Nick raps, “My baby mama killed you off a decade ago / You’re still cryin’ about it / Now who really the h—?”

Nick also references Eminem’s ex-wife Kim and their daughter Hailie, saying, “Call Kim, somebody get Hailie / And that other kid you raisin’, that ain’t even your baby.”

Cannon also makes drug-use allegations against Eminem, rapping, “The white boy, he f— with crack / Pills and smack, sh—, and he ’bout to relapse.”

The track also features a voicemail from Suge Knight saying, “You know, I don’t never do no talkin’, but Nick is family / This is your invitation / To prove to everybody else what you’re about.”

After the song was released, Eminem refuted Nick’s claims, tweeting, “U mad bro? Stop lying on my d*ck. I never even had a chauffeur, you bougie f—.”

He added, “I demand an apology Nicholas, you’ve made my gardener so jealous!”

Their feud has been going on for a decade. In 2009, Eminem bashed Nick and Mariah in his song "Bagpipes from Baghdad." Mariah responded by releasing "Obsessed," even dressing up like Eminem in her music video.

At the time, Nick bashed Eminem in a blog post, saying that Eminem is "still obsessed with my wife, the same female that wouldn’t let him get to second base from 8 years ago.”

He added, "This is my invitation to you, whenever and wherever you like sir. So when you come out of your introverted hiding place and ask your bodyguards if you can go out and play by yourself, I’m here Pimp!”

While Eminem claims he dated Mariah, she has denied the rumors.