“Extra's” Billy Bush sat down with NFL Hall of Famer Tony Gonzalez to talk about his life after football, his podcast “Wide Open,” and what it's like co-parenting son Nikko with ex Lauren Sanchez and her boyfriend, Jeff Bezos.

After 17 seasons in the NFL, Gonzalez landed in the Hall of Fame and earned a gold jacket and a bust in his likeness. How does he feel about the bust?

Tony insisted, “You got to pick an expression to have for a thousand years. What expression are you going to go with… like, do you go scowl?” He added, “It's a big decision to make. It is like naming a kid.” 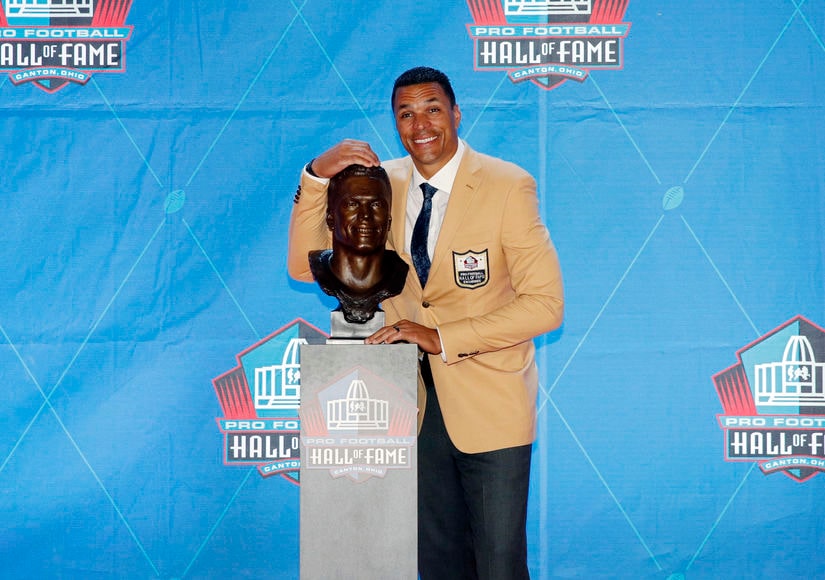 Billy pointed out that Tony's wife October was in the audience at his Hall of Fame ceremony, along with Lauren, Jeff and Nikko. Are they one big, happy clan?

Gonzalez, who also has three children with October, said, “I'm happy for them… They are doing their thing. I stay out of their personal lives, but it's been great.”

Bush asked about co-parenting, and Tony said, “It's great… Obviously we share Nikko, who's going to college next year. I'm going to miss him, but yeah, we co-parent great.”

Tony also hosts the “Wide Open” podcast, where he interviews some of the world's brightest minds. He told Billy, “I'm very interested in the best version of people… Everybody, when they were trying to achieve their goal, they got knocked down, and I want to know how you got up from that.”

Billy pointed out that Bezos would make a great guest. Gonzalez replied, “I'd love to hear his story. He's on the wish list… I got a little connection maybe…”

While his days on the field are over, fans can still look for Tony on Fox's pregame show ahead of “Thursday Night Football” and NFL Kickoff.