On Sunday, the couple exchanged vows at a private estate in Ojai, California, in front of their close friends and family.

A source told E! News, “It was a beautiful setting for a wedding, very peaceful and quiet. The vows were brief and lasted about 15 minutes. There was lots of cheering and applause as it ended."

As for the reception, the insider shared, “It looked like an elegant outdoor dinner party. There was a lot of laughter and happiness."

The source added, “There were lots of glowing candles and lights strung above. The food was served family style and everyone passed the dishes back and forth."

Melissa and Chris have not yet commented on the wedding.

Their wedding comes just six months after Wood popped the question. In February, Melissa showed off her huge sparkler, writing on Instagram, “yes yes yes it will always be yes.”

yes yes yes it will always be yes♥️

Chris shared his own pic, hinting that their wedding “will be soon.” Looks like they followed through!

A month before their wedding, “Extra” caught up with Melissa, who dished on what’s to come on “Supergirl” at Comic-Con. Watch!

The pair had been dating since March 2017. Romance rumors started swirling after they photographed kissing during a vacation in Cancun. At the time, a source told E! News, “They didn't appear to care who watched their passionate embraces.” 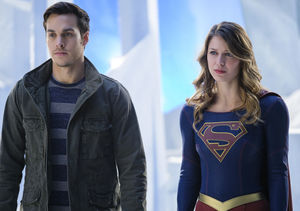 Benoist was previously married to former “Glee” co-star Blake Jenner, but they called it quits in late 2016 when she filed for divorce. Their divorce was finalized in December 2017.