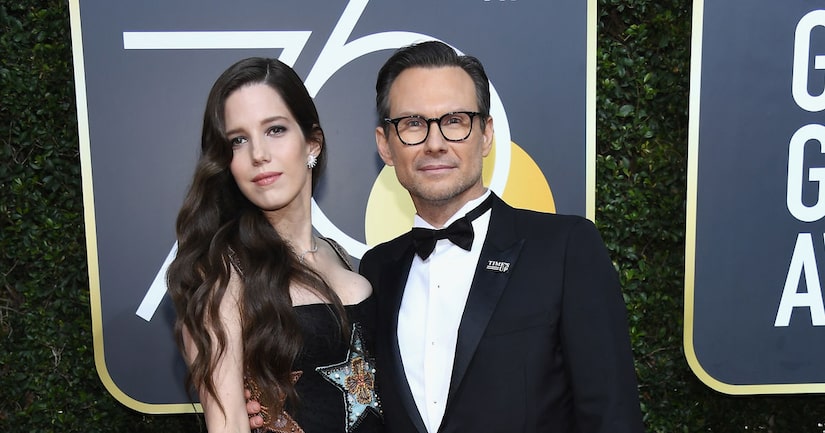 The news comes as a surprise since Christian never made a public announcement that they were expecting.

Slater is already a dad to daughter Eliana Sophia, 18, and son Jaden Christopher, 20.

In 2015, Slater opened up about fatherhood, telling Interview magazine, “I'm certainly happily married, I have a great relationship with my kids.” He added that he was “excited” for his son Jaden to move in with him and Brittany.

Christian and Brittany have been married since 2013. Before they tied the knot at a Miami courthouse, he told People magazine, “It will be good, intimate and small and family members. It will be nice.”

Earlier that year, Christian opened up on how he met Brittany in 2010. He told Jimmy Fallon, “This girl came walking along with another lady, a slightly older lady, and I was sitting in my usual spot eating my oatmeal that morning. So I'm a filthy old man eating my oatmeal and she comes walking along. This spot, I guess, was famous for people proposing to each other, actually. It was very, very nice. So she's there with this old lady and, next thing I know, she gets down on one knee and proposes to this older lady... I'd seen a lot of crazy stuff down in the Florida Keys! I of course was very intrigued and I went over and sat down in my other usual spot."

"I thought I'd just witnessed a nice lesbian engagement so I was coming over to say congratulations," Slater went on. "But it turns out it was her aunt and she was just trying to help her aunt capture the beauty and the romance of the park... The next thing I knew, we were hanging out in the Everglades."

Christian and Brittany celebrated their engagement on New Year's Eve 2012. He dished to People, “We had a big engagement party on the 31st of December and it was nice, it was like a New Year's and we had all the family come, 200 people, so it kind of already feels like we did the wedding, so we are just going to do a nice backyard situation.”