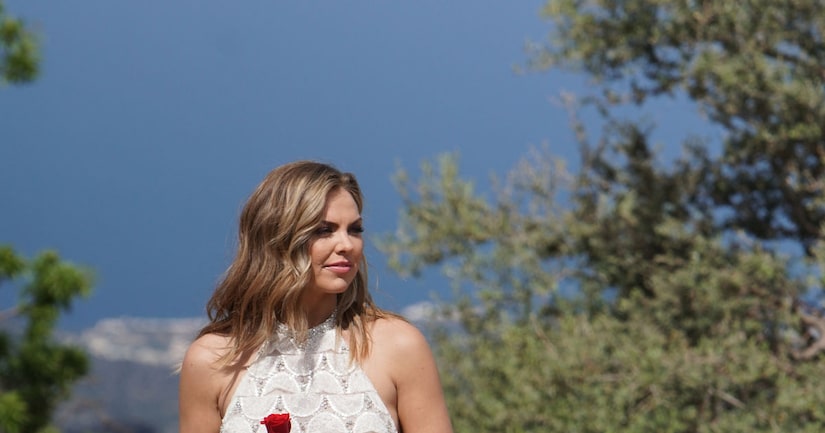 We are live-blogging Night 2 of the season finale of “The Bachelorette”!

After saying a tearful goodbye to Peter Weber, Hannah Brown must choose between her final two guys, Tyler Cameron and Jed Wyatt.

Keep reading to find out who Hannah picks and what goes down live in studio.

6:58 p.m. Chris wraps things up with a new look at "Bachelor in Paradise." He also announces the happy news that "BIP" couple Jade and Tanner Tolbert have welcomed their second child, a baby boy. Jade gave birth at home, in their closet!

6:53 p.m. Chris asks the question on all our minds: Are Hannah and Tyler really going to give this a go again?

Hannah says she just wants to hang out in the real world as normal people, and then see what happens. So you're saying there's a chance!

Hannah tells Tyler, "Our relationship was real to me and special... It didn't just go away and I still, I have feelings."

Hannah says since she's all about bold moves, she wants to know if Tyler would maybe want to "go for a drink and hang out."

Tyler replies, "I would love to. Just tell me when, I'm there."

6:48 p.m. Tyler admits it's been tough to see Hannah go through all the drama. "She's a fighter," he says. "She'll bounce back, and I know that the world is hers."

He also recalls that final day, saying he was "ready to take that big step."

6:46 p.m. The audience is going WILD for Tyler! Hannah has a huge smile on her face.

6:45 p.m. It's time to bring out Tyler! Hannah admits she's been "grieving" that relationship and says, "Those feelings didn't just go away." (Is there a chance for Hannah and Tyler?)

"My feelings have changed," Hannah replies. "I don't love you like that anymore... It's just not what anyone needs to start a relationship on, lies. I want to feel really confident with my forever."

That's it. It's over. No second chances.

"I appreciate your apology," Hannah tells Jed. "What you did was not right and not good, but I did fall in love with you, and I know that person's in there. I just hope that from this, you will be honest and learn and grow into the man that I do believe that you can be for whoever in your future."

6:27 p.m. Chris brings Jed out, to a weak smattering of applause. Jed and Hannah hug.

"There's a lot I would like to say," Jed begins. "First and foremost, from the bottom of my heart, I want you to know that I'm sorry."

"When I was reached out to about doing the show, I never would have dreamed I would meet the person I would spend the rest of my life with on a reality TV show."

6:21 p.m. Hannah updates Chris on her relationship status: "I am not with Jed anymore. The engagement's over. We're not together. That's not what I said yes to."

6:17 p.m. Hannah joins Chris Harrison live in the studio. She says the last few weeks have been "really difficult" for her. "In that moment my whole life just caved in," she recalls. "Everything I thought was true and real wasn't."

6:04 p.m. Jed is telling Hannah that she is "everything I've ever wanted in a woman." He wants to know how he can make this right.

Jed acknowledges he should have been honest, but he held back details because he was scared Hannah would walk away.

Hannah responds, "I just feel like this experience has been taken away from me, because I didn't have all the details... You got to see all of me, I didn't get to see all of you."

Jed promises that he "wants to be better" for Hannah.

5:57 p.m. Hannah is taking Jed to task! "How would you ever be ready to be engaged? Like, what?" she asks. I've been doing all the freaking steps and know what I wanted. There's a lot that feels like career and being noticed, and using me and our relationship for that."

5:51 p.m. Jed is explaining himself, admitting that there was someone, but insisting, "It didn't feel like it was an exclusive thing."

He tells Hannah that they hung out several times, slept together, and then went on a trip together. "There was not a label on it. I never was like, 'This is my girlfriend,'" he says.

But there's more! This woman met Jed's parents! Then, she threw Jed a surprise birthday party, and her parents got them a vacation to the Bahamas.

A few days before the trip, Jed got the news about "The Bachelorette." He admits that he told the woman that the show would be a really good thing for his music career. He also told her that he loved her, but says, "I knew it was a mistake, because I was leaving."

5:46 p.m. Hannah is about to meet up with Jed. She says she loves the person she got engaged to, but she's not so sure what is going to happen now.

5:45 p.m. Hannah explains what went down: Two nights after the proposal, Jed told her that he had been hanging out with a girl before he left to go on the show. Hannah says it was "hard to hear," but she tried to let it go.

Then, a few weeks later, a People magazine article came out.

Hannah recalls, "I started reading it, and it was not the same story I was told. The article said that he didn't really end the relationship before he came here... Jed has muddied the waters of our future together, and it's not what I thought I said yes to."

5:42 p.m. We're seeing video of Hannah and Jed as the happy couple, showing off her ring. She says in a confessional video, "With Jed, I was so happy because I thought I was getting this person I can spend life with. He was sweet and sincere and honest." Hannah pauses. "And that's not been the case."

5:36 p.m. Uh oh, maybe this won't be a happy ending! "What happens next is a story of broken promises and broken hearts," Chris tells the live studio audience. "Let me say it this way, Jed is about to face the music."

5:34 p.m. Jed is down on one knee asking Hannah to marry him! He says he's lived 25 years without her in his life and doesn't want to go another day. Hannah accepts and they kiss. Hannah then gives Jed her final rose.

And we really like that @AlabamaHannah smile! 😍 #TheBacheloretteFinale pic.twitter.com/W7QzsTBRjl

5:32 p.m. It's Hannah's turn to talk. She beams as she tells Jed, "I've been praying for this moment for a long time.. I am in complete love with you Jed Wyatt. I love you."

5:29 p.m. Jed has his guitar with him for the proposal, because of course he does! He says talking can be hard for him sometimes, then launches into a serenade.

5:28 p.m. Hannah is ready to see Jed. "As hard as that was, today I have clarity," she says. "I've been waiting my whole life to have my happy ending."

5:21 p.m. Tyler is in the car and being driven away. He says he feels like he's taken "a million uppercuts to the gut." He admits, "I'm hurt. I thought it was Hannah, but it's not the case."

5:17 p.m. Tyler starts giving a heartfelt speech about his love for Hannah. Hannah is looking away. She stops him, and he realizes it's not him.

Hannah tells Tyler, "You have supported me, you have been so sweet and strong for me and done everything that I've asked and more." She continues, "My life with you would be amazing, and when I told you I was falling in love with you I mean it, but I love someone else. I'm so sorry."

Tyler handles the news gracefully, telling Hannah, "I'm still gonna be your biggest fan rooting for you. I wish you and Jed nothing but success, I really mean that."

5:14 p.m. Hannah is ready to get things back on track, though the decision ahead will be "heartbreaking." She says, "Jed and Tyler have pieces of my heart, and I don't know how I tell somebody today they're not enough, because that's not true."

5:07 p.m. Hannah is still feeling torn between Tyler and Jed as she heads to the proposal location. She asks the driver to stop the car, gets out and walks away, slipping and falling in her gown and heels. "I can't do this," she tells a producer.

5:05 p.m. Tyler and Jed are both meeting with Neil Lane to pick out rings!

5:04 p.m. As she gets ready for the final day, Hannah muses about love: "They say love is the closest thing to magic there is. I am one of the lucky few who gets to experience something so magical."

5:00 p.m. Here we go! Chris Harrison tells Bachelor Nation to buckle up, teasing "massive destructive forces of lies and betrayal." Plus, he says there will be a proposal, which can "only be described as cringeworthy."