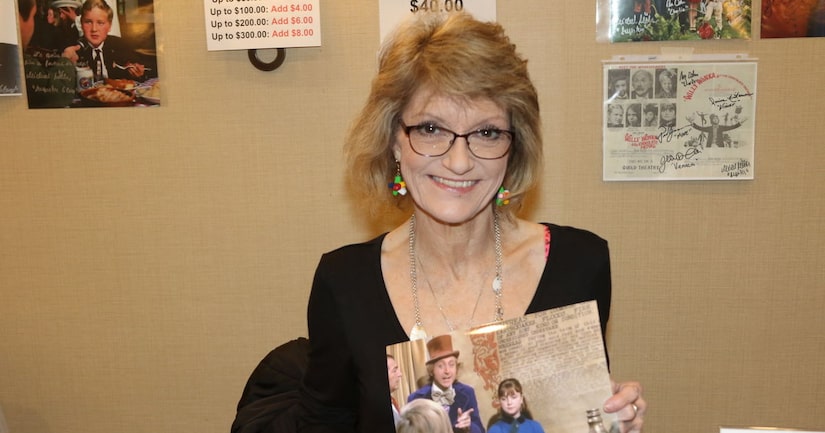 Denise Nickerson, who played Violet Beauregarde in the classic 1971 film "Willy Wonka & the Chocolate Factory," died Wednesday at the age of 62.

On Wednesday, Nickerson's son Josh and his wife Jasmine confirmed the sad news on Facebook with the message, “She's gone.”

“She was declining just as fast with the machines running as she has without them running,” the couple elaborated. “They were just making her uncomfortable and were unnecessary to stop or fix the problems."

On Monday, Nickerson suffered a “major medical emergency” and was taken to a hospital emergency room. She was eventually transferred to the hospital's ICU. Jasmine wrote on Facebook, “She's had seizures this morning and is in pulmonary and respiratory distress. The doctors have found that she aspirated and has developed pneumonia. They have upped her oxygen. She's under a DNR order so they aren't putting her on a ventilator or feeding tube.”

Though she was under hospital supervision, Nickerson was not getting any better. It was revealed that Nickerson was not breathing on her own, since she wasn't exhaling. As a result, she was “experiencing blood poisoning from carbon dioxide” and “not getting oxygen to her organs.” Jasmine added, “Her lungs and brain activity are too weak. As it stood earlier today, she had too much CO2 in her blood and she's in almost a coma-like state. She will respond to being shaken and open her eyes but there's not really acknowledgement of any kind.”

Jasmine noted that Josh “is not okay at all,” adding, “He's never really experienced a major loss like this. I'm just trying to support him as best I can. Please send him love or words of comfort. He is just coming to terms with the reality of the situation and doesn't know how to process it. He says to me a few minutes ago that she won't ever get to see or hold or know her granddaughter.”

Nickerson suffered a stroke last year and had a pacemaker inserted, but was “at high risk for additional strokes.”

One month after her stroke, Nickerson was visited by her “Willy Wonka & the Chocolate Factory” co-stars Paris Themmen, who played Mike Teavee, and Julie Dawn Cole, who played Veruca Salt.

Nickerson is best-known for playing Violet, the bratty, gum-snapping teen who turns into a blueberry after defying Willy Wonka's wishes and chewing a special new product that hasn't quite been perfected. "Violet!" her character's father exclams in one of the film's many iconic moments, "You're turning violet, Violet!"

She told People magazine in 2016 on the occasion of the death of Gene Wilder, who played Willy Wonka, “We met him when we were first doing the factory scenes. I remember sitting on the bleachers waiting for him to come out of the [chocolate] factory and rumor had gone around set that he was going to do the somersault — and he did and we all clapped. We got to know him a little more when we went in the room that got smaller and smaller [in the film], and when we sign the contract, but when we filmed in the chocolate room and he sang 'Pure Imagination' that just, he stole my heart.”

Along with "Willy Wonka & the Chocolate Factory," Nickerson was a series regular on the cult series "Dark Shadows" (1968-1970) and the popular children's educational show "The Electric Company" (1972-1973).

She gave up acting more than 40 years ago, after appearing in the 1978 film “Zero to Sixty.”

While it was reported that she pursued a nursing career after retiring from acting, Jasmine clarified, “Denise [hated] blood, fluids, and things nurses would traditionally deal with on a regular basis. The career I would most closely say she held was an accountant.”

Nickerson is survived by Josh and Jasmine.