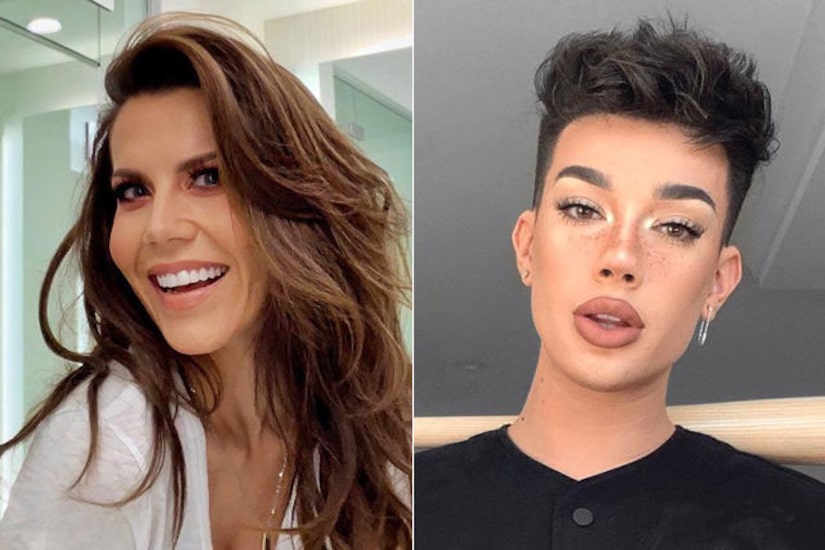 YouTubers and makeup artists Tati Westbrook, 37, and James Charles, 19, are trying to put an end to their feud!

Earlier this month, Westbrook posted a 43-minute video blasting her mentee, accusing him of spreading lies about her and claiming that he sexually harassed heterosexual men. She said, “It's really disgusting to manipulate someone's sexuality, especially when they're emerging into adulthood and don't have everything quite figured out. You're using your fame, power, money to play with people's emotions ... And you're doing that to have them behave sexually in your favor even if they're straight. And you know what, that's not okay.”

Last week, Tati released an 18-minute video explaining why she decided to slam James on the Internet. She said, “This was really a wake-up call, and it was me trying to reach someone who I found completely unreachable. I had been trying to deliver the same message so many times because this wasn't just about one thing.”

She reiterated, “I do really want the hate to stop. I want the picking sides, and the abusive memes and the language, and all of that, I really hope on both sides it can stop. That's not why I made the video.”

Their feud began when Charles showed his support for Sugar Bear Hair, a competitor to Westbrook's Halo Beauty line. In response to his endorsement during Coachella, she took to Instagram to reveal that she “felt betrayed” and “lost.”

Following Tati's second video, James addressed why he did a sponsored post for Sugar Bear Hair, saying that he did “actually did text Tati first,” adding that he “tried my best to explain the situation to her and give her a direct apology as well… but at this point, I had signed the contract and I absolutely had to post it.”

James also denied the allegations that he sexually harassed straight men. He commented, “I have never and would never and will never use my fame, money, or power to manipulate or get any sexual actions from a guy. That is disgusting. It is not me and the fact that Tati brought this up blows my mind.”

While acknowledging that he has messaged men on social media in the past, he has “always apologized for the unwanted attention and the conversation was put to a halt immediately.” He emphasized, “I do take full responsibility for sending these messages and this situation has definitely taught me that sending messages that are so forward and direct like this are unacceptable and I will no longer do that moving forward.”

After seeing James' video response, Tati tweeted, “I'm disappointed to see it littered with so many lies & half truths. I stand by my videos - do not twist my words into what they are not, hear the message.”

She admitted, “I'm working on not reacting out of anger & working through patience for what this right thing to do is. I remind you all... as I remind myself to do what you can to lead with kindness.”

Near the end of the video, James said, “I felt like this was started publicly and it was addressed publicly and I felt like it was only fair for me to address this publicly as well before meeting behind the scenes and talking further.”

They did eventually work things out. On Sunday, she wrote on Twitter, “I have been in contact with James Charles through an intermediary over the last week, and we believe that it is the best interest of our community, our viewers and our own mental health to put this matter to a rest.”

“For that reason, I will not be making any further public comments and I hope and pray that no one else will make anymore hurtful statements on my behalf.”

“In my original video, I felt the need to publicly break up with James with a warning call loud enough for him to hear. I was attempting to explain my upset and concerns so that everyone would understand my position and end the speculation that it was all over vitamins. Over the last eight years, I built my career based on honesty, integrity and trying my best to do what I thought was right. The toxicity and chaos that ensued over the last 10 days was absolutely not my goal, as it was a fight I was almost certain to lose.”

James added on Twitter, “I am on board to move on, will not speak about this further, but do hope to speak in the future when we're all ready. This week was awful for all of us and I ask that the community focuses on positivity moving forward.”

They are planning to take a break from social media after the drama.

Tati and James became friends in 2016 after he reached out to her on social media. She made the decision to “help him” with his career. He even did her wedding makeup the following year, and the video was posted on her YouTube channel, which earned him buzz and followers.