Oh, KJ Apa — a boy so cute he gets two first-name initials instead of just one. He plays the redheaded Archie Andrews on The CW's hit show “Riverdale,” but he's more than just a talented actor. Here are 7 reasons why we love KJ Apa:

1. He's not afraid to poke fun at himself.Whether he's trolling Cole and Dylan Sprouse on IG or posting photos of his old gap-toothed grin (the glow-up is real), KJ keeps it real on social media. We stan a stud who doesn't take himself too seriously.

2. He's easy on the eyes.Just like Archie Andrews' hair color, KJ Apa is red-HOT. He looks equally good rocking a suit or showing off his rock-hard abs. Thank you for blessing our feeds with all of your shirtless photos, KJ. We should probably stop scrolling and hit the boxing gym with you ASAP!

3. He has a sensitive side.During his appearance on “The Tonight Show with Jimmy Fallon,” KJ got emotional while talking about the passing of his TV dad, Luke Perry. The two actors were really close on and off set. Our thoughts are with the “Riverdale” cast and crew and Luke's family.

4. He has a HOT accent.Although he is very convincing as an American on-screen, KJ is actually from New Zealand, and his accent is SEXY.

We came up with a mathematical equation to sum up our findings:

Person from New Zealand = KiwiKiwi = A snackTherefore, KJ Apa = a snack. You're welcome.

5. He loves rom-coms.Does the perfect man exist? I think we just found him. Who needs to watch “Love Actually” alone when you could be cozying up to KJ Apa?

6. He is low-key a rock star.We've seen him perform on “Riverdale,” but KJ Apa is also a musician IRL. In fact, music was his first passion. He plays guitar and piano, and he's in the rock band Legend. We'll just be over here waiting for KJ to come serenade us… is there a KJ app-a for that? (We'll be here all week.)

7. He has a soft spot for animals.KJ loves animals, particularly pups. Just take a look at his Instagram and prepare to swoon over the adorable shots. Is it weird that we want to be this dog?

For those of you who need more KJ in your life, be sure to check him out in “The Last Summer,” hitting Netflix Friday, May 3. 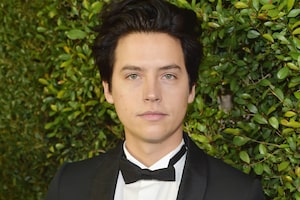