Stefanie Sherk passed away on April 20, and now the model's cause of death has been revealed.

In an autopsy report released by the L.A. County Medical Examiner's Office, her death is listed as “suicide” by anoxic encephalopathy, asphyxia, and drowning.

On Friday, her husband Demián Bichir addressed the results in a series of Instagram posts. He wrote in part, “The Los Angeles County Medical Examiner-Coroner has completed the investigation regarding my wife's death and have made the results public. It is with courage, dignity and love for our Stefanie, that we confirm such information. It was our hope that we would have some time to heal and grieve before we could talk about this issue that affects way too many people around the globe.”

He continued, “This is a serious and, in many cases like ours, an invisible affliction that corners human beings in a terrifying and dark place. Depression has taken the lives of so many beautiful, wonderful, talented people such as my beloved wife, Stefanie. The nightmare that we have been through over the last several days will only be eased if we succeed in taking our pain and sorrow out into the world as an important message of awareness so, hopefully, other lives can be saved.”

Bichir wrote that he plans to delve deeper into the human mind, health care, and more “about this experience as soon as the days go by and we heal.”

Demián, who was with Stefanie for nearly 10 years, went on to praise Sherk as his “soul mate.” He wrote, “Stefanie was an extraordinary daughter, a generous loving sister, a smart and funny friend, a dignified, elegant and talented actor and a compassionate human. She was the perfect woman for me. My soul mate. My best friend. She made me better in every sense. I fell under her gorgeous spell ever since I laid eyes on her for the first time. And that was the same effect she caused on everybody who had the fortune to know her.”

He then asked for “peace and privacy” to grieve. “Stefanie's life and legacy were way bigger and more wonderful than what made her leave us so early. We love you deeply, Stefanie Sherk.”

The Instagram posts come after Bichir confirmed the 43-year-old's death on Wednesday. He told followers, “It has been the saddest and toughest time of our lives and we don't know how much time it will take for us to overcome this pain. Stefanie's beautiful, angelical and talented presence will be immensely missed. We will hold Stefanie in our hearts forever.”

He added, “We thank everybody beforehand for their prayers and we respectfully ask for your understanding so we may grieve in peace and privacy in these incredibly difficult times. It is our sincerest hope that our beautiful Stefanie, my angel and love of my life, will rest in eternal peace.” 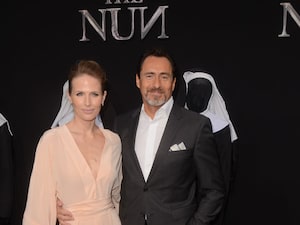 The Blast reports that Bichir found Sherk's body at the bottom of their swimming pool in Sherman Oaks after he came home from a grocery store. The site noted that her death was being investigated as a possible suicide since she had "intentionally weighed her body down to keep herself at the bottom" of the pool, according to law enforcement.

Paramedics were able to resuscitate Sherk, who was then rushed to a hospital. She spent a week hospitalized before passing away.

Sherk had acting credits in “#Hashtag: The Series,” “Valentine's Day,” “Star Power,” “Loco Love,” and the upcoming film “Grudge.” Bichir was nominated for the Academy Award for Best Actor for his performance in 2011's "A Better Life." He currently stars in “Grand Hotel.”