Prince William and Kate Middleton have released precious photos of their son Prince Louis a day before his first birthday!

Kensington Palace released a statement on Instagram, saying, “The Duke and Duchess of Cambridge are delighted to share three new photographs of Prince Louis ahead of his first birthday tomorrow. The photographs were taken earlier this month by The Duchess at their home in Norfolk.”

In one of the adorable photos, Louis is showing off his two bottom teeth. A source recently told People magazine, “He really is the most cheerful, smiley little boy — he's always so happy and content.

In response the photos, Prince Harry and Meghan Markle wrote on Instagram, “Happy Birthday Louis! Sending lots of love from both of us 🎂🎈 xo."

The “xo” is more reason to believe that Meghan is personally managing the SussexRoyal Instagram page. It has been speculated that Meghan writs her own captions because of the choice to use "z" instead of "s" in words like "organization" and “re-energize.”

Kate also took the first official photos of Louis, days after his birth. She even captured a sweet moment of her daughter Prince Charlotte kissing her baby brother. 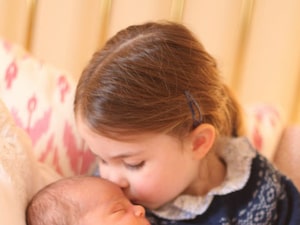 The royals are known for sharing photos of their kids when they reach special milestones in their lives. 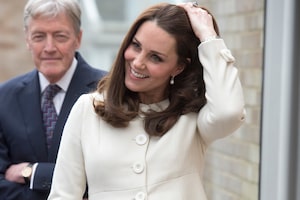 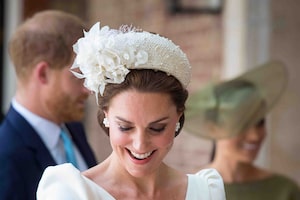