Former Victoria's Secret model Selita Ebanks and sports manager Brian Amlani are taking the next serious step in their relationship.

On Friday, Ebanks announced that they were engaged on Instagram. Along with the hashtag “HePutARingonit,” she posted a quote from Charles Wiles, which read, “Before that day I met you I didn't know what true love meant, but angels are for loving and you are heaven sent.”

Brian posted the same photo, adding, “I love you forever @Selitaebanks! Thank you for loving me the way you do! #FutureWife #AmlaniQueen.”

It is unknown how long they've been dating. They've kept the relationship off the radar by not posting photos of each other on their social media accounts.

Ebanks, 36, was previously engaged to Nick Cannon, but they called it quits in 2007. She also dated Terrence J for two years. 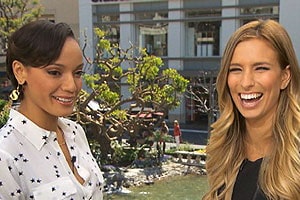