On Tuesday, Underwood showed off her baby bump in husband Mike Fisher's shirt. She wrote on Instagram, “Kicking off 2019 right...Me and my boys cuddled up watching a movie. Yes, I'm wearing Mike's shirt. 😬 #LettingItAllHangOut.”

In November, Carrie revealed that she was pregnant with a baby boy while hosting the 2018 CMAs. After much pressure from co-host Brad Paisley, asking if she were carrying a, "Johnny or June? Keith or Nicole? Garth or Trisha? Waylon or Willie?" she responded, “Oh, my gosh — Willie! It's a Willie!" 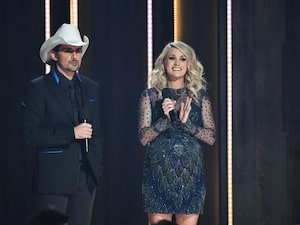 Carrie Underwood Reveals Sex of Baby #2 — Is It a Boy or Girl?

At the same show, Maddie & Tae's Taylor Dye accidentally slipped that Carrie's due date is January, telling Us Weekly, “And we've already offered to babysit.”

Maddie & Tae will hit the road with Carrie when she goes on her Cry Pretty Tour 360, which begins in May.

In August, Carrie announced she was pregnant while promoting the tour. She said on Instagram, "Mike, Isaiah and I are absolutely over the moon and excited to be adding another fish to our pond.” 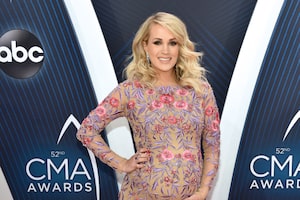 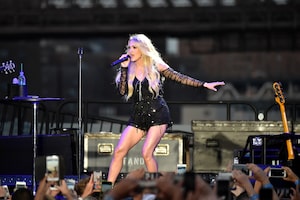 Carrie Underwood Reveals How Her Gruesome Injury Affected Her Singing 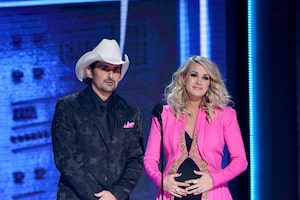 Bump Style! All of Carrie Underwood's Looks During the CMA Awards