On Wednesday, Taylor and and wife Natalie welcomed their sixth child, a baby boy who they named Claude Indiana Emmanuel Hanson.

The couple told People magazine, “Our new little man, Indy, is the best gift our family could imagine. His arrival brings with it a new sense of adventure and excitement for the future.”

In August, Taylor announced they were expecting. He wrote on Instagram, “What's better than being a dad of five? Perhaps being a dad of six. Baby Hanson coming in December and we are over the moon.” 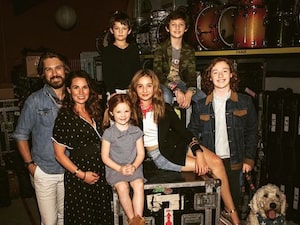 Will Taylor and Natalie have more children in the future? He told People, “We've never had a preconceived idea [of how many children we would have]. We just love our kids and are not afraid of taking on a bigger family than we have. We're just one at a time.”

Taylor's brothers Zac and Isaac are also fathers — Zac has four kids and Isaac has three.