“Miranda Sings” star Colleen Ballinger is a mom for the first time!

On Tuesday, Colleen revealed that she gave birth overnight to a baby boy. She wrote on Twitter, “He's perfect.”

While she hasn't shared a baby pic yet, she noted that her son looks like fiancé Erik Stocklin. She tweeted to a fan, “it's almost spooky how much they look alike. a full on mini me! he's so cute!!! i can't stop staring at him! he's so perfect!”

She told another fan, “he came so early! he didn't want to miss Christmas!” 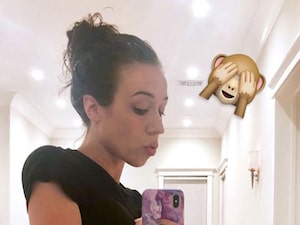 The name of Colleen and Erik's baby has not been revealed yet.

Hours before her baby's arrival, Colleen posted a pic of herself on a hospital bed, tweeting, “here we go! 😬.”