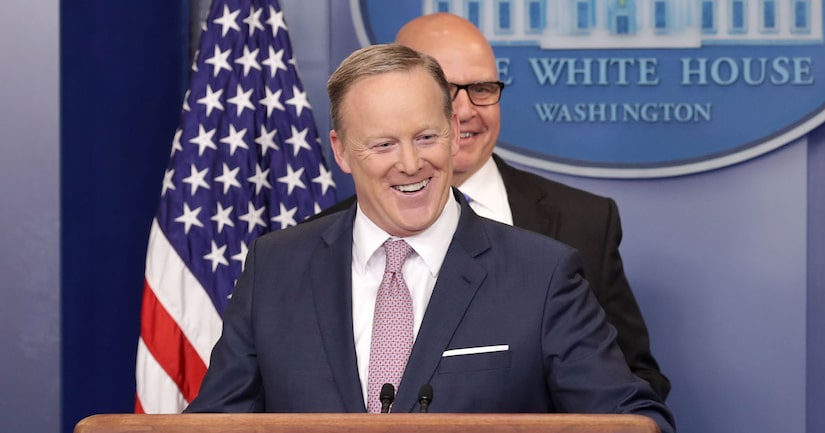 Spicer was fresh off his sit-down with Jimmy Kimmel, who made no qualms about not supporting President Trump. Though Kimmel poked fun at him, Sean said, “We obviously disagree politically, but he is a good guy.”

Of his time in the White House, Spicer said, “I had been a spokesman for 25 years. I don't think anyone could have been prepared for what was to come… There are some days and some interactions that I am not happy with and I look back and say, 'That wasn't the best that I could have been…' It was rather calm most of the time…There were days that were funny and fun and exciting, and there were days that were not as pleasant.”

If he had the chance, what would he do over about his brief tenure? He answered, “When I went out and talked about crowd sizes.”

Spicer also weighed in on the current press secretary, Sarah Huckabee Sanders. He pointed out, “I became the story too often. I think Sarah has kept the focus on the agenda and the issues much more than I did.” He went on to say, “She is doing much better at keeping the stories and the issues at the forefront, which is a good thing for a spokesperson.”

Sean also made it clear that he would not go back to work in the White House in any capacity. He said, “No, I was honored to do that job, but I am done.”

The 46-year-old has been busy promoting his book across the county, where he has been met with some resistance from protesters. Spicer commented, “That's part of our country's great heritage, being able to express support or disapproval… I knew that was going to be a part of this.”

President Trump rooted for Spicer by supporting his book on social media, as did VP Pence, but have they read it? Sean responded, “I don't know. They have it… I don't know if they read it.”

As for what he hopes people will take away from “The Briefing,” he emphasized, “I hope they get a greater understanding… [of] what's going on and how things are happening and why they are happening — no one wants someone to root against them."