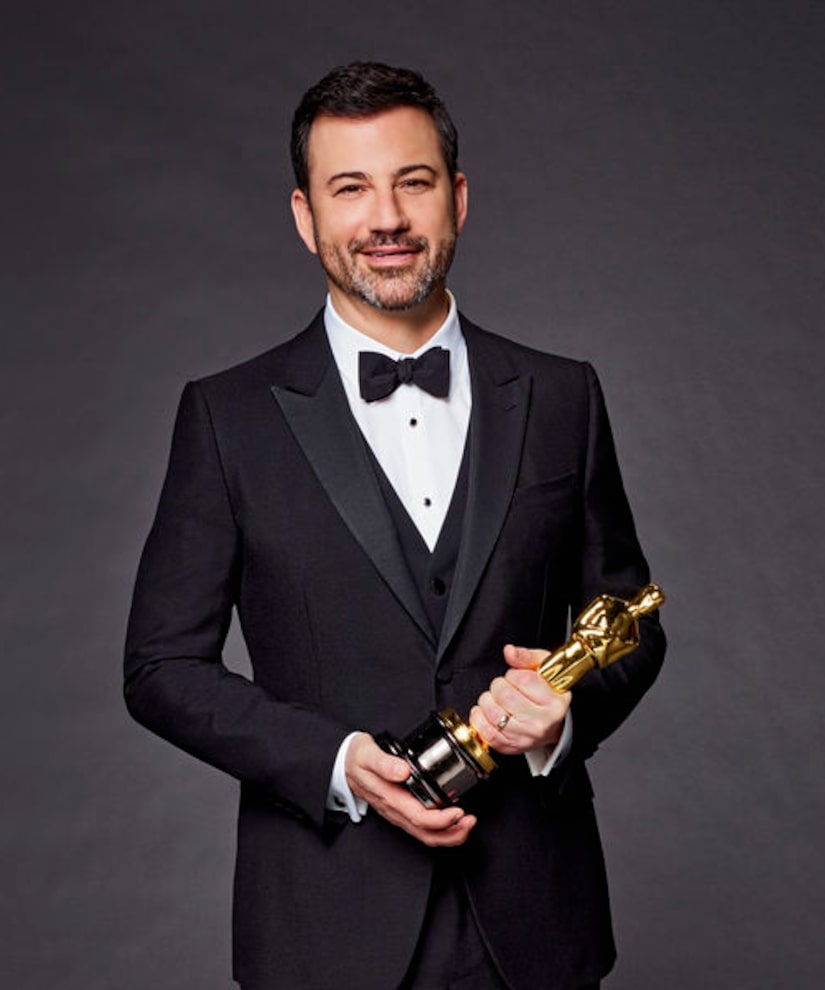 Host Jimmy Kimmel is taking center stage as the 2018 Oscars are handed out... and "Extra" is here to give you running commentary!

11:48 p.m. The show ends with Helen Mirren riding in on a jet ski with the Mark Bridges! The costume designer for "Phantom Thread" must have had the shortest speech of the night!

11:46 p.m. "The Shape of Water" winner Guillermo del Toro dedicates his award to all the young filmmakers out there. The filmmaker points out that dreams are possible.

11:41 p.m. Warren Beatty and Faye Dunaway, who presented during the Best Picture Oscar mix up last year, are back to give it another try. The winner is... "The Shape of Water"!

11:40 p.m. Jimmy takes the stage to say there is only one category left... what could go wrong? He jokes the mix up last year is "Waterhouse" under the bridge.

11:34 p.m. Frances jokes if I fall over pick me up because I have some things to say. She ends with a powerful moment, asking all the women in the room to stand up with her... every woman from every part of the industry!

11:29 p.m. Past winners Jodie Foster and Jennifer Lawrence take the stage to present Best Actress. Jodie is on crutches and when J.Law asks what happened... Foster says "Streep," adding "She "I, Tonya-ed" me!" Jennifer jokes, "She tripped me once." The women go on to present the statue to Frances McDormand for her performance in "Three Billboards."

11:22 p.m. Jane and Helen make the big announcement... the Best Actor trophy goes to Gary Oldman for "Darkest Hour." Oldman thanked Winston Churchill, whom he played in the film, for being with him on this "incredible journey." After thanking many friends, family members and colleagues, he joked, "I'm obviously not going to win the ski," referring to the jet ski that Jimmy promised to the winner with the shortest speech.

11:20 p.m. Jane Fonda and Helen Mirren get a standing ovation as they present Best Actor! The duo acknowledge all they've seen over the years and the changes in the industry.

11:15 p.m. Guillermo del Toro just won Best Director for "The Shape of Water." In a poignant speech, he points out that the film industry is so good at erasing lines when everyone is telling us to make them deeper.

11:02 p.m. Lin Manuel Miranda and Emily Blunt just handed the Best Original Song statue to Kristen Anderson-Lopez and Robert Lopez for "Remember Me" from the movie "Coco"! Robert dedicated the award to his mother.

10:58 p.m. Christopher Walken is up to present Best Original Score! The trophy goes to Alexander Desplat for "The Shape of Water." He dedicates the award to his daughters.

10:51 p.m. Zendaya announces the performance of Best Original Song nomineee "This Is Me" from "The Greatest Showman." Keala Settle gives a powerful and emotional rendition of the showstopper.

10:46 p.m. Sandra Bullock takes the stage to present Best Cinematography... she surprises the crowd by asking that the lights be dimmed, quipping, she wants to get back to her 40s! After the lights are dimmed, she says it is a good thing Gal Gadot isn't up there because it would be like Gal was looking a mirror. She then presents the award to "Bladerunner 2049"!

10:45 p.m. The show then pays tribute to the veterans and looks back at past war movies... afterward Jimmy apologizes to the men and women who have served... because Matt Damon was included in the clip montage. As Jimmy announces "Speed," "Gravity" and "Crash" star Sandra Bullock is taking the stage, Kimmel pokes fun at Harrison Ford, saying those are the reasons not to get in a plane with the star!

10:35 p.m. Nicole Kidman takes the stage to present Best Original Screenplay! The winner is... Jordan Peele for "Get Out"!

10:31 p.m. Chadwick Boseman and Margot Robbie are up to present Best Adapted Screenplay. The big winner? James Ivory for "Call Me by Your Name."

10:26 p.m. Ashley Judd, Annabella Sciorra and Salma Hayek, who have been a big part of the #TimesUp movement, take the stage to talk about equality in Hollywood moving forward. They then present a video to look back at some of the trail blazers in the industry.

10:17 p.m. Dave Chappelle presents the performance of Best Original Song "Stand Up for Something" from "Marshall." Common and Andra Day deliver a powerful performance with a political message, paying tribute to Parkland victims and calling out President Trump.

10:14 p.m. Maya jokes that Tiffany ziplining in "Girls Trip" was amazing, and Tiffany teases that Maya taking a dookie in the street in "Bridemaids" was life changing. The women agree that all that hard work paid off and landed them on the Oscars stage. The women then go on to present Best Short Live Action film to "The Silent Child."

10:11 p.m. Tiffany and Maya offer up a comedy routine about heels and white people, before Tiffany waves to Meryl and says, "I want you to be my mommy some day." The women go on to announce "Heaven is a Traffic Jam on the 405" as Best Documentary Short.

10:05 p.m. The stars are armed with candy for the moviegoers... and Armie Hammer and Ansel Elgort even have hot dog cannons! Gal and Jimmy enter the theater first and announce that they brought some goodies for everyone. Jimmy jokes that it smells like marijuana, before announcing the crowd is live on the Oscars. The screen even flashes to the stars in the crowd as the celebs say a big thank you to moviegoers. The rest of the stars enter... Guillermo del Toro and Lin Manuel Miranda are carrying a huge sub sandwich, Armie and Ansel have their hot dog cannon and begin shooting into the crowd. Emily Blunt passes out candy and offers hugs. Jimmy brings one brave soul up to announce the next presenters... Tiffany Haddish and Maya Rudolph. 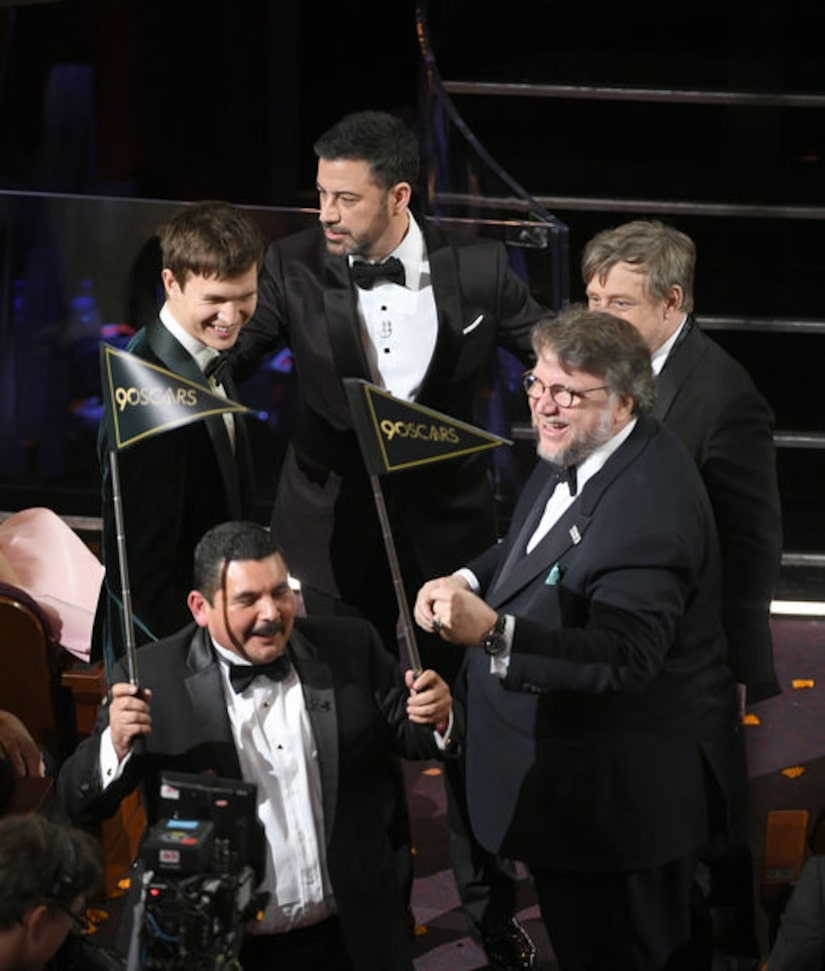 9:59 p.m. Jimmy goes on to thank the moviegoers for making it to the theater to see these films. He then announces a parade of stars will be leaving the Oscars to go across the way to surprise an audience of moviegoers watching a sneak peek of "A Wrinkle in Time." Among the stars are Gal Gadot, Guillermo del Toro, Ansel Elgort and others.

9:58 p.m. Jimmy jokes that before the film editors got ahold of "Dunkirk," it was a romcom starring Reese Witherspoon.

9:43 p.m. Daniela Vega presents the performance Best Original Song nominee "Mystery of Love" from "Call Me By Your Name."

9:36 p.m. Jimmy just got a visit from his 9 year old self wearing a "Star Wars" t-shirt... the stunt was followed by castmembers from "Star Wars" taking the stage to present Best Animated Short. The award goes to Glen Keane and Kobe Bryant for "Dear Basketball"!

9:26 p.m. Best Supporting Actress is next! Mahershala Ali is presenting the award. "I, Tonya" star Allison Janney is the big winner! She jokes, "I did it all by myself!" before praising her fellow nominees and her "I, Tonya" family including the bird who "elevated my work." She also remembered her brother Hal, who passed away several years ago, saying, "You are always in my heart."

9:23 p.m. Jimmy steps into the crowd and stops at Steven Spielberg... jokingly asking him for some pot!

9:22 p.m. Rita Morena takes the stage in the same dress she wore to the Oscars in 1962! The actress is presenting Best Foreign Film. The Oscar goes to "A Fantastic Woman"! 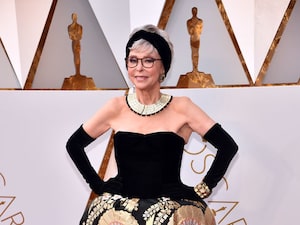 9:21 p.m. Jimmy is still pushing the stars to keep it short... he's now offering up a trip to Lake Havasu!

9:12 p.m. Eugenio Derbez presents a performance of Best Original Song nominee "Remember Me" from "Coco." Gael Garcia Bernal, Miguel and Natalia LaFourcade offer a sweet and fun rendition of the song from the animated film.

9:09 p.m. Lupita Nyong'o and Kumail Nanjiani take a moment to to address the dreamers out there, before announcing "Shape of Water" as the winner of Best Production Design.

8:42 p.m. Taraji P. Henson introduces the Best Original Song "Mighty River" from "Mudbound," which is performed by none other than Best Supporting Actress nominee Mary J. Blige. The powerful rendition is set to the backdrop of the countryside. 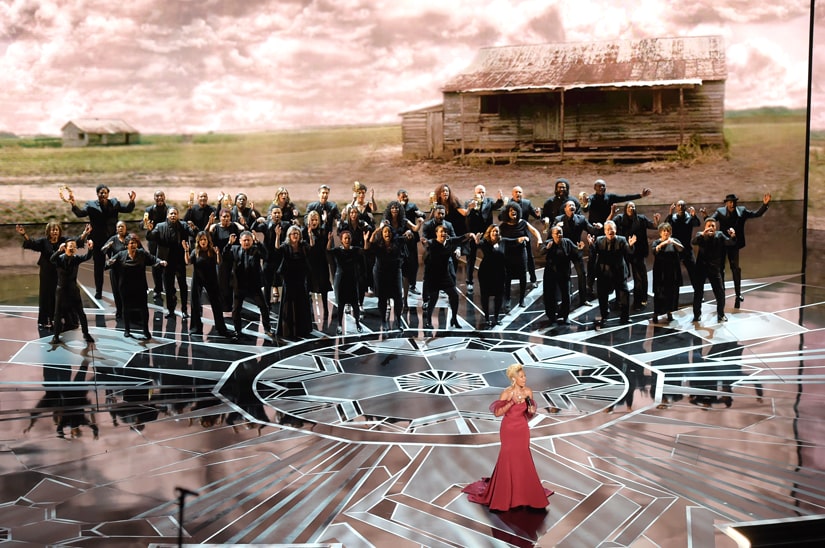 8:38 p.m. Greta Gerwig and Laura Dern take the stage to present Best Doc! The big winner is "Icarus," a film about doping in sports. 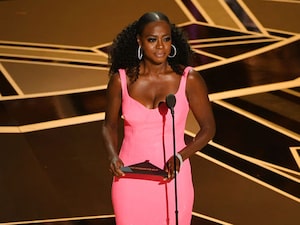 8:30 p.m. Eva Marie Saint, known for films like "On the Waterfront" and "North by Northwest," is up to present Best Costume Design. And the winner is... "Phantom Thread"!

8:26 p.m. Armie Hammer and Gal Gadot take the stage to announce "Darkest Hour" as the winner of Best Makeup and Hairstyling!

8:24 p.m. Jimmy tells the crowd that if the winners go long with their speeches they will hear this... and Lakeith Stanfield runs out yelling, "Get out, get out!"

8:15 p.m. Pretty in pink! Viola Davis is up to present the first award... best supporting actor! The Oscar goes to Sam Rockwell for "Three Billboards." Sam tells his fellow nominees that they "rock" gushing that they inspire him. He goes on to thank his parents, co-stars and crew, anybody who has ever looked at a billboard, and his "lovely Leslie Bibb." He ends by telling Leslie, "You light my fire, baby!" He ends the speech with a special tribute, saying, "For my old buddy, Phil Hoffman." 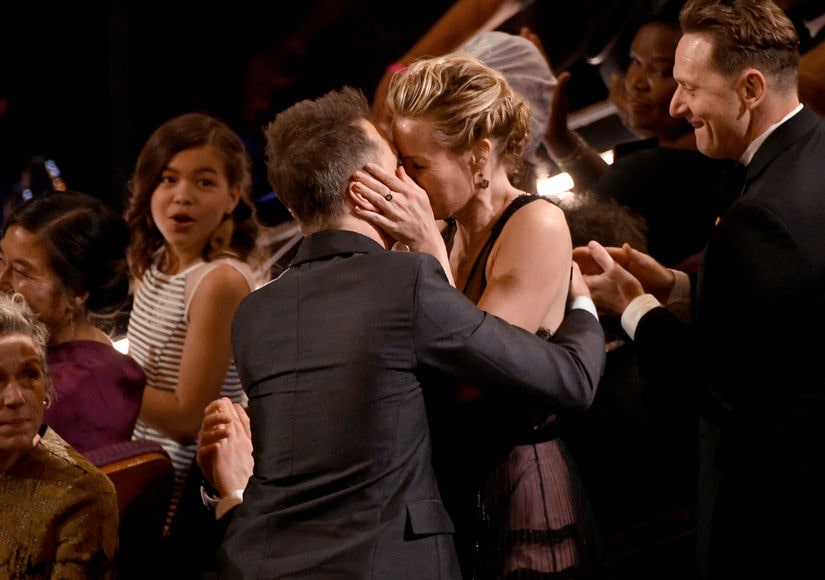 8:12 p.m. The host wants to keep it short this year... encouraging the winners to keep their speeches short for the chance to win a jet ski. He even got a little help from Helen Mirren to show it off.

8:08 p.m. Jimmy's highlighting the nominees... "Lady Bird" director Greta Gerwig as the first female director nominated in eight years, Jordan Peele nabbing a nod for his horror hit "Get Out," Timothee Chalamet's first nod for "Call Me by Your Name," Christopher Plummer taking the spot as the oldest nominee for "All the Money in the World" and more.

8:06 p.m. He got political too, thanking President Trump, saying, "Remember last year when it seemed like the Oscars were racist? It's gone, thanks to him!” On a sincere note, he encouraged everyone "have a positive considerate conversation — not as liberals or conservatives, but as Americans," insisting, "We could make America great again. It starts with us.” 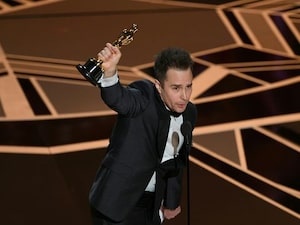 8:04 p.m. Kimmel then touches on the #MeToo movement pointing out that the Oscar statue is a great example considering he keeps his hands where you can see them. He also brings up Harvey Weinstein being booted from the Academy, saying that if Hollywood and other work places put an end to harassment... women will only have to worry about being harassed every where else they go. 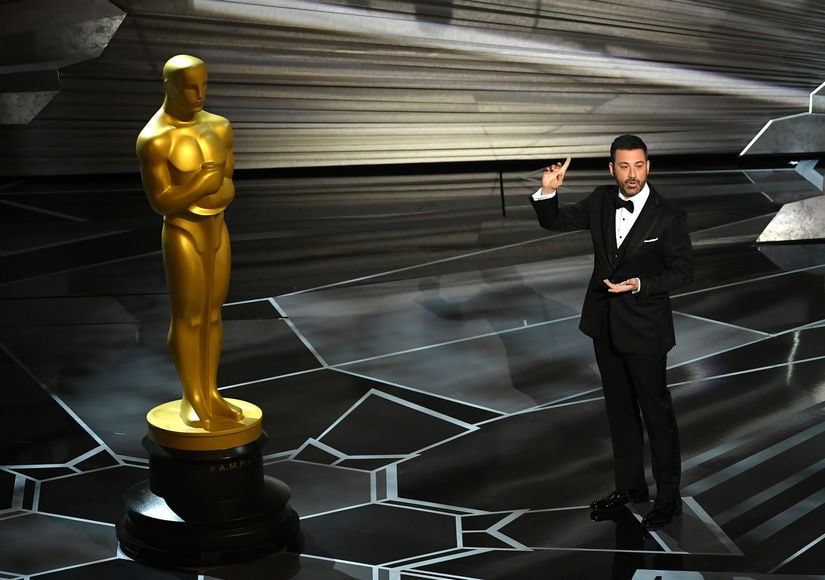 8:03 p.m. Jimmy takes the stage and takes on the best picture mix up head on. He joked, “Some of you will be going home tonight with an Academy Award. This year, when you hear your name called. Don't get up right away.”

8 p.m. Oh wow, Jimmy Kimmel kicks off the Oscars with a black and white throwback look. He didn't pull any punches, poking fun at Emma Stone, Armie Hammer, and even Meryl Streep!