On Valentine's Day, Daley announced they are expecting by posting an Instagram photo of the couple holding a sonogram.

Black posted a similar pic on Twitter, writing, “A very happy #ValentinesDay from ours to yours. 👨‍👨‍👦❤️.”

A very happy #ValentinesDay from ours to yours. 👨‍👨‍👦❤️ pic.twitter.com/6ugN3Ho6y3

The news comes less than a year after they tied the knot in England. 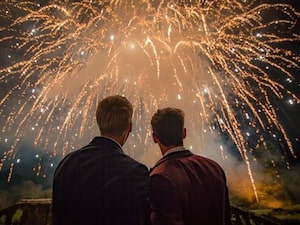 In 2016, Black opened up about their desire to have children, telling Out magazine, “We were so busy making all these plans — we both wanted to have children; we both wanted to build a home of our own someday. I draw, so I was sketching little plans for houses on cliffs overlooking oceans, while Tom watched over my shoulder — it was a very grown-up version of playing house.”