On Tuesday, the reality stars went public with their relationship on Instagram. She posted Polaroids of herself kissing Paul, writing, “melting.”

A source told E! News, “Danielle and Paulie were set up by their publicist. They are completely obsessed with each other and both have never been happier. Everyone is just so happy for them. When you know, you know."

Over the summer, Danielle and Wells Adams sparked dating rumors after their on-screen makeout on “Bachelor in Paradise.” Adams is now dating “Modern Family” star Sarah Hyland, who has Maltby's seal of approval. 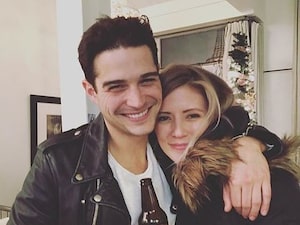 In December, Danielle told People magazine, “I'm so happy for him. I've met Sarah — Sarah is amazing. They bounce off each other so well. They bring out the best in each other. They're both so funny and they just amp each other up so much — and the smile that Wells gets on his face is unreal. It's so cute. It really is so cute.”