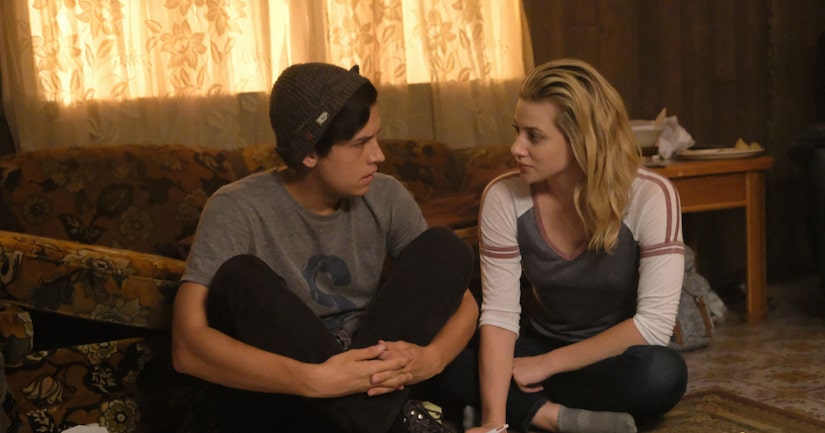 This week's “Riverdale” episode was intense!

ExtraTV.com caught up with some of the “Riverdale” cast in Vancouver, where they touched on some of the night's big moments.

Of course, the Bughead breakup was instigated by the Black Hood. The unknown villain is obsessed with Betty, and forced her to end her friendship with Veronica and call things off with boyfriend Jughead.

Making it worse, Betty turns to BFF and former crush Archie for support and asks him to deliver the bad news to Jughead.

Lili, who plays Betty, called it “devastating,” saying the hardest part is that her friends don't understand her actions.

“It is sad and heartbreaking to see her have to do that,” she said. “And you know it is to protect him and she does all these things to protect them. And they don't know, and the audience knows, and that is what is so hard to see.”

Cole, who plays Jughead, thinks “Jughead has absolutely no problem seeing himself as someone who could be easily thrown to the wayside,” and believes Archie delivering the news could have lasting consequences.

Sprouse explained that despite the three of them being friends since childhood, “Betty had always favored Archie, and it's something that will definitely see prevalence later on in the season… so Archie coming to deliver the bad news is not only a slap from Betty, but really a slap from Archie too, which I think is something we explore a lot later.”

KJ, who plays Archie, said that as far as his character was concerned, he did it to protect his friend. “It was for the right intentions which was to help his mate. I don't think there was any other intention in there.”

Will the couple reunite? Lili said, “As for Betty and Jughead at the end of [episode] 205, you hope that there is a chance that Betty can have in the future to explain herself and to reconcile with him, but with the Black Hood still being a present figure in her life, it is hard to imagine that her relationship with anyone can continue or go back to the way that it was.”

The breakup aside, Ashleigh weighed in on her character Josie's participation in taking down Nick St. Clair.

Nick tried to take advantage of Veronica, and later drugged Cheryl. Josie and the Pussycats, along with Veronica, intervened. They attacked Nick, before he could harm Cheryl.

Murray said, “I think it spoke volumes for all us to get together and go save Cheryl the way she needed to be saved.”

She continued, “He deserved to get that ass-whooping. I really enjoyed that scene because it was empowering, and it showed camaraderie and a togetherness that women don't often have, especially young women.

Watch “Riverdale” on Wednesdays at 8 p.m. on The CW.