Radio host Delilah Luke is opening up about her son Zachariah's suicide.

Last week, Zachariah, 18, “took his life” while “battling depression.” After announcing the sad news, Luke revealed that she was taking time off to mourn his death.

While it was unknown how Zachariah died, he did leave behind a suicide note. Delilah told People magazine, "His goodbye note did not mention sadness, anger, angst or depression, just a pressing madness about feeling like this world was not his home.”

Delilah opened up about his depression, which begin after a car accident in December. She said, “The event traumatized him.”

Along with the car accident, Zachariah went through an illness and a breakup, and started suffering in school. She commented, "When he found out he wouldn't graduate he spiraled into depression, and was honest about it.”

She continued, "He was doing so well. He was looking forward to making up his missed credits, graduating and starting film school. He was fascinated with science fiction and time travel and began to talk about the book 'A Wrinkle in Time' and quantum physics.” 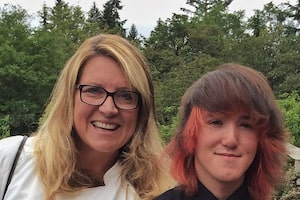