“Extra's” Charissa Thompson hung out with actress Priyanka Chopra at Universal Studios Hollywood, where she dished on her “Baywatch” co-stars Zac Efron and Dwayne "The Rock” Johnson.

Chopra played coy about her love life, but said neither Zac nor The Rock are her type. Why? She said, “They're both great guys. I would be really intimidated by their bodies… and their discipline. The Rock is going to the gym at 5 o'clock in the morning every day for, like, three hours.”

Of Zac, who she called “Abs,” Priyanka added, “He has muscles in places you shouldn't be muscular.”

Priyanka also opened up about her reaction to seeing her co-stars' rock-hard beach bodies on set every day. She said, “I started emotionally eating, just watching them work out. I was like, 'Oh, my God.' I felt so guilty.”

Along with promoting her “silly, fun summer movie,” Priyanka is more than excited to return to work on her show “Quantico,” which was just renewed for a third season.

Before she wrapped things up with Charissa, the former Miss World also answered questions from our Facebook fans, including describing her co-stars in one word. Watch!

“Baywatch” is out in theaters now. 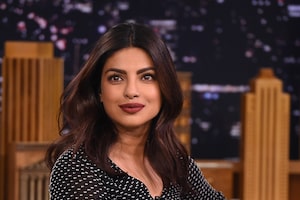 Priyanka Chopra Goes Back to Work After ‘Quantico’ Accident 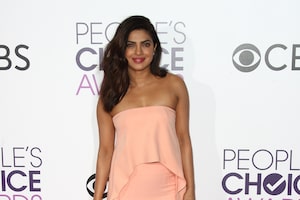 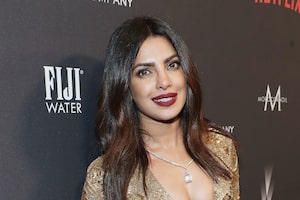 What Priyanka Chopra & Mariah Carey Have in Common