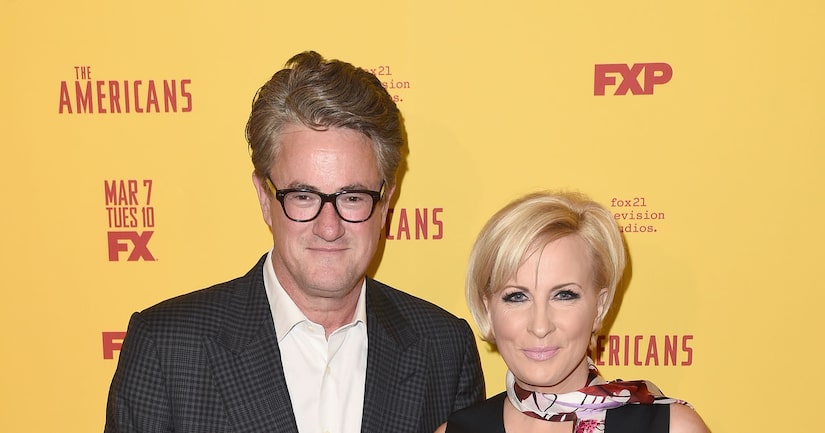 The two worked together for a nearly 10 years before things became romantic. Mika recently opened up on their relationship, telling Vanity Fair, “Everyone talks about how there was always something there. Over the past year and a half, I realized I had to face these feelings and that it was time to stop putting them in a box. It was not an easy process and it was not an easy set of decisions for either of us. It was something I couldn't deny anymore.”

Joe popped the question during Mika's 50th birthday celebration at the Hotel du Cap in Antibes, France. While they were heading to the Bellini bar, Joe stopped Mika to make his move. She said, "Halfway up the hill, he said he needed to sit down. We hadn't been feeling well, so I thought, 'Oh, poor guy, he can't make it up the hill.' His glasses were fogging up he was so nervous. I kept thinking he really must not have felt well.”

"When I saw him on one knee, I started laughing nervously, almost hysterically,” Brzezinski said. “And then he asked, and I said, 'Absolutely.'”

Originally, Joe was planning to propose when they were in Monaco, but didn't feel like it was the right place and waited. Once he put the ring on her finger, he gushed that it "looked like it was meant to be there.”

Joe has been married two times before, but explained why he's giving marriage a try for the third time, saying, "I thought after the last time that I would never, ever do this again in a million years. Then it occurred to me that with us working together and being live on the air every day for three hours that we were forced, no matter what disagreements we had, what misunderstandings we had, to work through it and get right with each other by 5:59 a.m.”

“I was talking to a friend a couple months ago, asking if this was stupid. 'Am I making a terrible mistake?'” he revealed. "They said that no, that we had extraordinary training on getting through difficult times together, and it'll only make us a stronger couple and stronger in married life.”