Actress Zoe Saldana plays deadly fighter Gamora in “Guardians of the Galaxy Vol. 2,” but at home she is a nurturing mom to three boys.

Saldana and husband Marco Perego welcomed their third son, Zen, in February. Zoe sat down with “Extra's” Mario Lopez to talk about the new “Guardians” film and life with her boys. After twins Cy Aridio and Bowie Ezio, 2, and baby Zen, she says is done having kids, telling Mario, “Three is enough."

When Mario joked that there is a lot of testosterone in her house, Saldana smiled and said, “So far, they are still very little, thank God. My husband is such a sensitive person, and he's so Italian and flamboyant that thank God we don't have testosterone issues. If anything, I am the one that comes a little too strong and hard. I know my years are numbered, when that day comes and I'm like, 'Hey, guys!' and they're like, 'Can you move, Mom?'”

The 38-year-old also revealed how she uses her green-skinned character to help her twins, who now think she is related to The Hulk. “They are eating their veggies, they are picking up after their mess, they are going potty more, because we are in middle of potty training.” Her kids put two and two together very quickly. “When they saw my makeup and everything, I saw the way they all put it together,” Zoe remembers. “Yes, Mama knows the Hulk, so I use that."

Zoe also explained why she chooses not to show her children's faces on social media. “It's respecting them — they don't have the ability to voice how they feel about something, and I would hate to be wrong that I am forcing them and exposing them to something that they didn't understand. I would hate for them to say, 'I didn't like that and you did it.'”

Along with her family, she also dished on Gamora and Star-Lord's relationship, and the prospect of them hooking up in “Guardians of the Galaxy Vol. 2.” Saldana teased, “We don't want it to seem forced, and we keep trusting on their relationship and what's bringing them together is their past, the fact that there's so much pain in the way they grew up, the great deal of empathy they feel for each other makes for a strong friendship, so James goes back and forth with wanting to ruin the friendship or wanting the friendship to move on to the next level.” 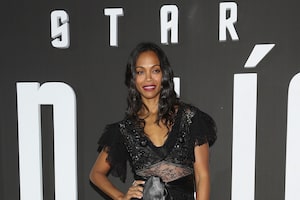 Zoe Saldana Dishes on Life with Her Twin Boys 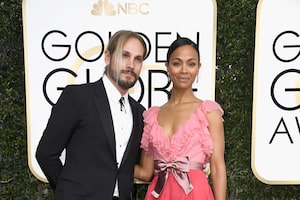 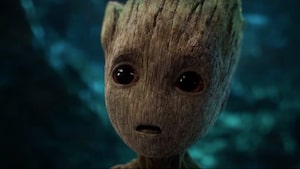