“Extra's” Renee Bargh caught up with Charlize Theron at CinemaCon in Las Vegas to talk about her kissing scenes in “Atomic Blonde” and “The Fate of the Furious.”

Charlize smiled when asked about making out with her “Atomic Blonde” co-star Sofia Boutella, “Well, look at her, I mean, come on.” She did admit, “Those scenes are always awkward, yeah, there's nothing not awkward about it,” adding, “We thought it was something that was deserving of the movie, and pushed the envelope a little bit, felt more interesting, more real.”

The actress also joined the cast of “Fast and Furious” for “The Fate of the Furious,” going head-to-head with Dwayne “The Rock” Johnson and locking lips with Vin Diesel. “Yeah, it's not that kind of smooch, though. It's the evil kind of smooch. It's like the serpent's tongue. Ew. Why did I say that? That was horrible.” She clarified, “Me being the serpent, not Vin.” 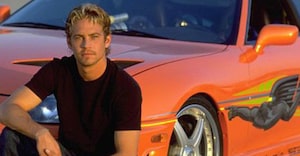 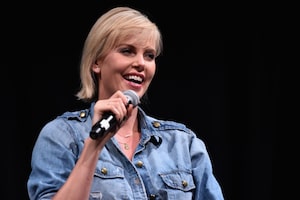