On Oscars Sunday, “Gary from Chicago” aka Gary Alan Coe and his fiancée Vickie Vines did the impossible and stole the show in front of all the biggest names in Hollywood.

As part of a skit, a group of unsuspecting tourists had their buses rerouted to the Dolby Theatre, the site of the Oscars. They were eventually led right into the auditorium, where they were able to mingle with the stars in the middle of the telecast.

Among the Hollywood tourists, Gary and Vickie stood out with their priceless reactions to the stars in front of them.

Just three days before their surprise TV appearance, Gary was released from Corcoran Substance Abuse Treatment Facility and State Prison after serving over 20 years. In 1978, he was convicted of attempted rape after he allegedly forced a woman into the bushes. Seven years later, he was convicted of robbery. In 1997, he was found guilty of petty theft, which was a third-strike offense that sent him to prison for 25 years to life with parole.

Behind bars, Gary now says he found religion… and love with Vickie. He told KABC on Monday, "Change is possible. It's a sad day to be in prison for 20 years and not be able to be a dad, granddad to your children. You know what my son told me today, man, and I almost come to tears? He said he's proud of me. So to hear your children say that they're proud of me means the world to me.”

Despite reports claiming he was serving time for attempted rape, his lawyer Karen Nash took to Facebook to set the record straight. She wrote, "Hi all! Sadly we have seen some inaccurate reporting this morning! Gary was not sentenced on a rape charge! He does not have a rape conviction. He served 20 years for petty theft. He has a prior from 1975 for attempted rape when he was a teenager. If you see inaccurate reporting please forward the reporters name and contact. Cheers!"

When asked if he was a registered sex offender, Karen commented on Facebook, "Yes, he is one of many people who, despite not being dangerous, is required to register." She continued, "He has a prior from 1975 for attempted rape when he was a teenager. That does require registration. However, the life sentence was for stealing perfume."

One day before Gary's past came to light, Karen wrote on Facebook, "Spent this afternoon laughing and crying with Gary and Vicky. For those of you who missed it- I spent years working on Gary's case. He got a life sentence for stealing perfume in 1997, and we finally won release this year. He got out on Friday, and was sight seeing with his lovely fiancé Vicky. If you watched the Oscars, you know the rest."

A spokesperson for the California Department of Corrections and Rehabilitation told “Extra” about his prison time, "He was received by CDCR in October 1994 from San Francisco for Grand Theft Exceeding $400. He was paroled in late 1996, but was received back from parole in early 1997 for Petty Theft with priors, wherein he received a 25 to Life With Parole sentence out of Los Angeles, as a third striker. In early 2017 under Proposition 36, Gary Alan Coe was re-sentenced, and his sentence was reduced from 25 years to 6 years. Per pre-sentencing credits, and time served, he was fully discharged on 2/23/17 upon completing his term.”

TMZ reports that he is not a registered sex offender in California.

Though rumors were swirling that Gary and Vickie were going to be part of Jimmy Kimmel's post-Oscars show Monday night, they did not appear. 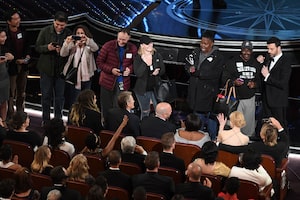