On Sunday, “Extra's” Mario Lopez enlisted the help of his mini-me daughter Gia at the Los Angeles premiere of “Trolls.” On the red carpet, the father-daughter duo caught up with the film's star Justin Timberlake, who went solo.

Timberlake has been traveling all around the world to promote the film while wife Jessica Biel and son Silas are back home in New York. Timberlake gave an update on Silas, which is actually a family name, sharing, "He's a year and a half… want him to stay that size."

When Mario asked if Silas will have a brother or sister in the future, Timberlake responded, "I'm having a lot of fun practicing.”

Aside from his son, Justin couldn't help but gush over Gia, who also contributed to the interview. He said, “It's an overload of cuteness. If there was ever a Bring Your Kid to Work Day, this is it.” When Gia asked Justin's favorite part about playing a troll, he commented, “Oh, my God. You are so cute,” turning to Mario to ask, "How do you stand it?” He went on to say, “My favorite part about playing a troll is I could wear my pajamas to work.”

Catch Justin as the voice of Branch in “Trolls” November 4. 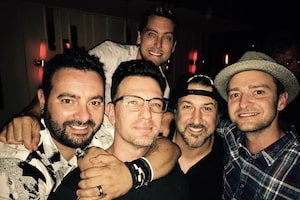 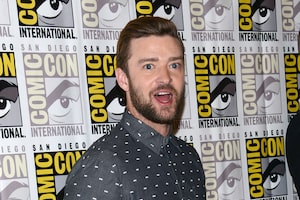 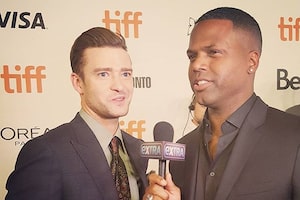