“Extra's” AJ Calloway caught up with Taraji P. Henson to talk about her new memoir “Around The Way Girl,” politics and what is in store on “Empire.”

The Emmy-nominated actress also dished on why she's afraid to release her memoir. “I decided to write the book before Cookie became a phenomenon, so now I'm nervous because all eyes are on me and I'm telling all my business.”

In the book she opens up about her very private stories, including surviving domestic violence, and her decision to walk away. “That's always a deal breaker for me, you put your hands on me, I got to go, because we reached the point of now we can't be rational. It was my choice to decide to move on for the greater good of us, to continuing our friendship to raise our kid. I don't hate him, may he rest in peace, because he passed away.”

The single mom to son Marcel said she moved on by moving to Los Angeles with $700 to her name. “I went to my cousin's house… I stayed with them for two months and I had two months to get situated, to get established… I needed to get a job, a car, I needed to find daycare for my son, and I did it in two weeks. I was set up.”

Taraji said the courage and drive to succeed came from her family. “I watched my dad. He was homeless. He never hid anything, he never hid any part of his life from me, he told me the truth, which allowed me to live in my truth because my dad wore his on his sleeve.”

She went on, “I just had amazing parents, amazing family they keep me grounded. That's something I work hard for... to stay grounded, because it's so easy to get swept up and believe the hype and think you are better than just because you do this for a job, but at the end of the day it's just a job. It pays my bills. I love what I do, it just so happens millions of people get to see me go to work.”

Henson also shared her political views. Taraji, who denounced Donald Trump on Instagram over the weekend for his past comments about women, told AJ about filming a campaign ad for Hillary Clinton with her “Empire” co-stars.

“Can you say it's urgent? You see what's going on, a lot of people are soured by our politics. We don't want people to become numb, so numb that they don't care and don't vote, because then we have a problem on our hands. We felt, as the artistic community, it was our job… I'm grateful we were able to use our power in a good way.”

The actress added, “You know I hand-picked him! So Taye, I'm letting the world know, you owe me a Chanel bag!”

She also gushed about having Mariah Carey on set. “That was amazing, because I was only in two scenes with her; first was introduction for her character and second she was in the studio recording with Jamal. What a song, first of all, and I'm sitting this close, I could touch her!!!!” She laughed, “Hi Mariah Carey, it was my own concert, my private concert, it was like, how many times is that going to happen?!” 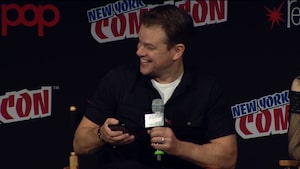