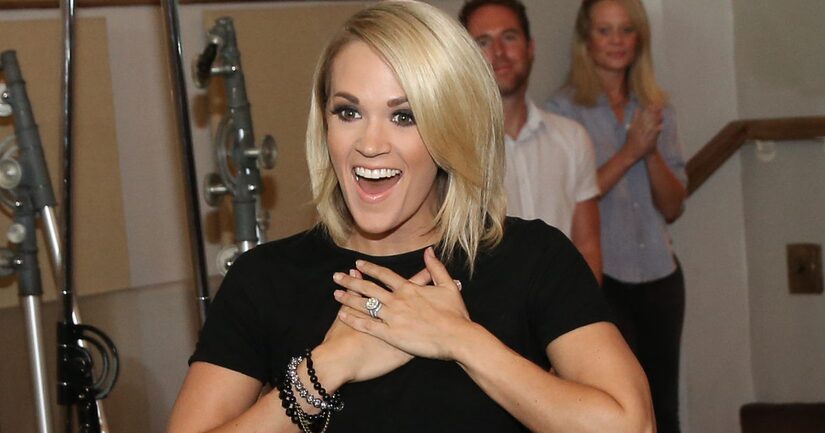 Only “Extra's” Alecia Davis was with country singer Carrie Underwood as she returned to her roots in Oklahoma.

Carrie has a lot on her plate as wife, mother, and superstar. Her latest song, “Church Bells,” is heating up country's top 10 music chart, she's traveling the U.S. on her “Storytellers Tour,” and even making time to take Alecia by her old stomping grounds in Checotah.

Underwood took a walk down memory lane while touring her high school. While looking at an old yearbook, she described herself as “average,” saying she is happy to be home.

“It always feels good to come home,” she said, noting that her parents still live there. “This will always be home.”

The “American Idol” winner continued, “I'd like to come back more, but holidays and stuff like that... I'm around several times throughout the year… it's home. You know it's a small town. It's always nice to drive through town and be like, 'Well, that's new' or 'Where did that go?' Things change and evolve, but it still feels like home.” She confessed that one of her favorite things to do when she's back is go to Sonic!

After selling millions of records, Carrie is still as humble as ever as she points out a plaque in her old school's Fine Arts building. “I actually fought this for a long time. They wanted to put a plaque up, name this the Fine Arts wing after me, and I was like, 'I don't know how I feel about that'… it's just me, but I get it, its really cool. I'm honored… hopefully, people look at it and are like, 'That's a good reminder that somebody came from here and is successful.'”

Home is also wherever her husband, NHL pro Mike Fisher, and their 1-year-old son Isaiah are, even when they're on the road. “We do as much as we can. I'm always looking up baby-friendly things to do in wherever we are… he loves being outside.”

Pool time is a must when they're at a hotel. “I want him to have childhood normalcy… we take him down to the pools, and the hotels and let him splash around because a kid would do that.” She also sees some road trips in their future. “I have some future plans for an RV for sure... will be taking some summer drives.”

Underwood credits becoming a mom with her confidence, revealing Isaiah was the inspiration for her shorter hairdo. “Life is easier. I love long hair, but I would be blowing my hair and Isaiah would be tugging on my pants like, 'Pick me up,' and I would hold him and blow my hair dry, and I'm like, 'This is just ridiculous. What can I do in my life to just kind of streamline things and make things easier?' That was one, definitely.”

Mike and Carrie are getting ready to celebrate their wedding anniversary. “I think we're going to try and take a vacation this year, It's been a couple of years since we've gone anywhere, so we deserve that. We just like to relax. Give us a beach somewhere, a lake, we're good, we're easy to please.”

Before heading on vacation, the 33-year-old will be in Checotah shooting a new campaign for her athletic wear, Calia. She's teaming up with Dick's Sporting Goods, where her clothes are sold, and their Sports Matter program.

“We are kicking off a $500,000 donation that they're going to be making to different girls sports programs through the US. We're kicking it off here at my alma mater at CHS by donating $100,000 to the girls athletic programs here. That's big, that's huge, we got to announce it to the girls out there a few minutes ago and they were freaking out. I could see the wheels turning and the girls know what they need like bags and uniforms.”