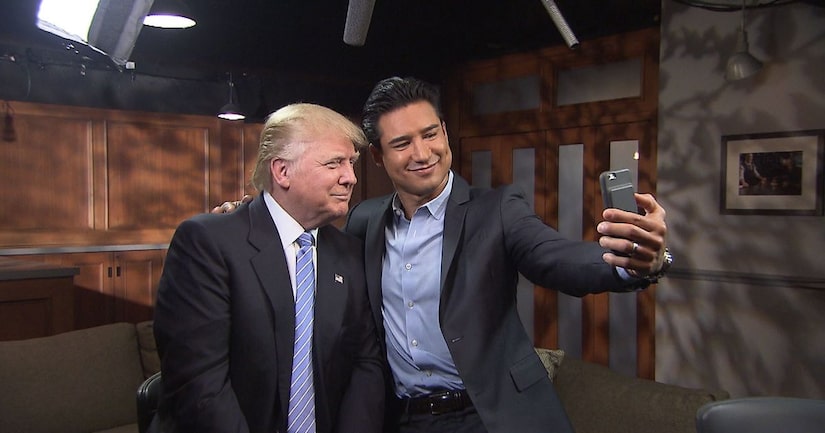 The presidential candidates are vying for votes in California... and taking over Hollywood. Presumptive Republican nominee Donald Trump sat down exclusively with “Extra” host Mario Lopez, fresh off of his appearance on “Jimmy Kimmel Live,” and just hours after an Anaheim rally got out of hand.

Mario wasted no time with hard-hitting questions for Trump regarding his immigration policies and statements about Hispanics. Mario said, “I'm Latino, happen to also be conservative, a child of Mexican immigrants, and when you initially announced, you did so where some people thought there was some harsh rhetoric, maybe disappointed some Hispanics. How do you gain their support and trust?”

Trump replied, “I know all about your heritage and respect it greatly. My relationship with Hispanics is fantastic. I know so many; so many are friends... they buy apartments from me... they rent apartments from me. I have so many employees that are Hispanic, they are incredible people and the way that people are going to love me is that I'm gonna produce jobs like nobody's ever produced jobs. We're gonna take our jobs back from China and we're gonna take them back from Mexico.”

Donald continued, "We're gonna have tremendous jobs for Hispanics, for everybody. You may have seen the recent polls; I'm starting to do really well with Hispanics, because they want -- especially the ones that are here legally -- they have their homes, they have their jobs, they don't want it taken away.... It's only gonna better, because I'm gonna produce jobs, and ultimately it's about the economy, it's about jobs, Mario.”

As for his strategy to beat Hillary Clinton, Trump opened up about using personal attacks, “I have to be careful, but I have to be who I am, and she's tough. She's proven to be tough, she certainly is resilient over the years.”

Continuing in attack mode, the former "Apprentice" boss continued, "The Clintons have really hurt a lot of people," to which Mario replied, "I've heard you have an arsenal of info on the Clintons.” Trump retorted, “And they've got an arsenal of info on me. I hate to say it, they've got on me, I've got on them, we'll see what happens. The fact is, they're very tough, they're very nasty. They play a tough game… she's a player and we'll see how it all comes out in November.”

Come November, Trump could find himself elected. Will he give up his lavish home in Trump Tower for 1600 Pennsylvania Ave? “Look, the White House represents something so special, it represents our nation, and certainly [I] would live there.”

Another question on many people's minds is what the Trump family would bring to the White House. Donald is confident his wife Melania would be a great first lady. “She'll do so much for women, and you know Ivanka [will], too. She is doing amazingly in the business.” He also noted he has sons Don and Eric, as well as his younger kids Tiffany and Barron. “They are a little bit young yet, but eventually maybe they will be in the company and they'll do something politically.”

Donald also confessed he was forced to walk away from his hit “Apprentice” franchise to run for president. “All of the NBC executives, they came to my office and they wanted me to renew for a long period of time… You're not allowed legally to do both. You can't have a show. I don't know, it's called equal time. I think it's ridiculous, frankly, but you can't do both, nor do I think you'd have time, to be honest with you. That's when I knew, 'I'm going to do this,' and I'm not sure I knew it was going to turn out this well.”

How does he think Arnold Schwarzenegger will do as the new “Apprentice” honcho? “I think he'll do fine. I hope he'll do fine… I think it took courage for Arnold to go in there.”