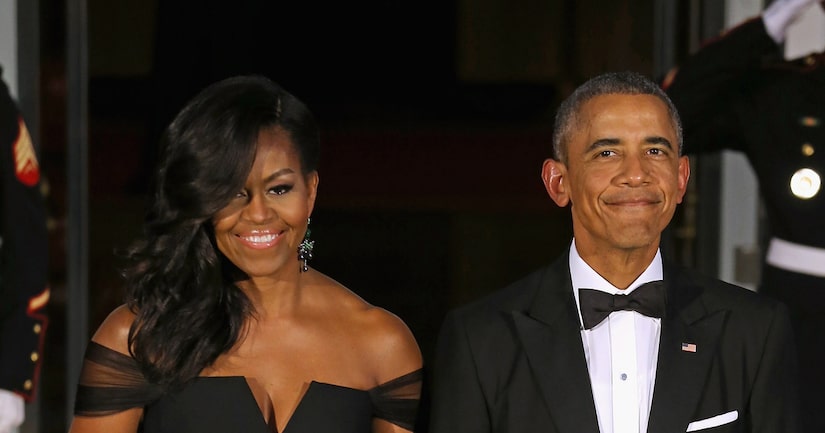 First Lady Michelle Obama is set to make her acting debut on “NCIS,” and only “Extra” was there as the cameras rolled. The First Lady also made time on set for a candid interview with AJ Calloway, where she opened up about falling in love with Barack Obama.

Mrs. Obama and President Obama have been happily married for nearly 24 years, and have called the White House home for nearly a third of those years. Michelle reflected on their time together and revealed the moment she knew the President was the one for her.

She smiled, saying, “It's interesting, though, because before Barack was doing the political thing, he was a community organizer and we were starting to date and he took me to one of the trainings he was doing with a group of single-parent mothers on the South Side of Chicago, and he was working with these folks to help make change in their neighborhoods and he gave a speech and he talked about the world as it is and the world as it should be.”

Michelle continued, “I watched him in that room — natural, engaged, passionate — and I was like, 'This guy's different…' So it was at that training that I sorta thought, 'I could be with somebody who cares so deeply about other people and is willing to make the sacrifices.”

She laughed while thanking AJ “for taking me down memory lane, so when he doesn't put his shoes up tonight, I'll remember, 'Ah, that's why I love you.'”

Mrs. Obama is also loving the first lady of the music industry. Asked about her go-to for workout jams, she said, “Anything Beyoncé.” As for her message for Beyoncé, Michelle said, “Anything you do... I will work out to it.”

It would be no big surprise if the mother of two is working out to Beyoncé's new album “Lemonade” right now!

Speaking of music, the First Lady also revealed the two songs that she and President Obama think of as “theirs.” She said, “Our wedding song was Nat King Cole's 'Unforgettable' and our first inaugural song, which Beyoncé actually sang, was 'At Last'.”

And while it may be the last few months she spends in the White House, Michelle will certainly remember shooting scenes for “NCIS,” as it was the first time a non-news show was shot inside the White House. She shared, “I had my little acting debut.”

Mrs. Obama acted alongside the show's veteran Mark Harmon, gushing, “We had a scene together and he was phenomenal, very welcoming, made me feel comfortable on the set.” She added, “You hear that? 'On the set,' even though the 'set' was my house, but it was still their set. It was really a nice experience, a lot of fun.”

Michelle's appearance on the popular drama will be part of her efforts with the Joining Forces initiative, which she launched with Dr. Jill Biden, wife of Vice President Joe Biden, in 2011. “I'm just really grateful for the 'NCIS' team because they've incorporated a theme into their show which is near and dear to me.”

She explained about her scene, “We're in a military-spouse roundtable and all the participants, the actors, in that scene are actual military spouses… so it's a great way to incorporate our military families and make more Americans aware of the challenges they face and the resilience they have.”

Check out more of Mrs. O. on “Extra” next week as we go behind the scene of her “NCIS” shoot, and watch her appearance on CBS Tuesday! 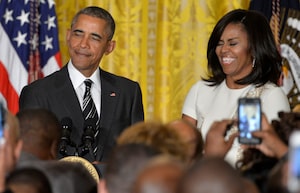 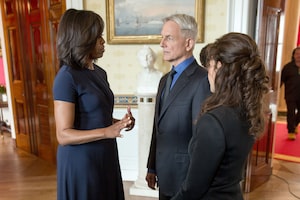