Designers Kendall and Kylie Jenner dished with “Extra's” special correspondent, Creative Director of O Magazine Adam Glassman, about fashion and more at the launch of their new clothing collection Kendall + Kylie, in NYC.

When asked where they see themselves in five to 10 years, Kendall revealed she hopes to be a mom!

“Hopefully I'll be a mom in 10 years,” Kendall said. “I'll have a family so I'll be like making maternity clothes.”

Kylie added, “I feel like we have a little room to evolve.”

The youngest Jenner said she's banking on her Instagram followers to help get there.

“I learned how important social media was when I launched my lip kits,” Kylie explained. “I don't do any other advertisement other than my Instagram. It's been such a success for me so I know how powerful it is.”

The famous sisters hope that their new line will be a reflection of them.

Kendall said, “I think designing a line especially for people that love your style and your fans it naturally comes off as your own style.”

When Adam asked how they would describe their style. Kendall turned shy, “Mine? Oh, I hate talking about myself.” Kylie jumped in, “I think he's is, I would say simple, classy.”

Kendall described Kylie's as “edgy and different and cool.” Also cool? Working together. Kylie admitted, “We had a lot of fun, there were definitely some challenges that what you see on the paper might not be the same off, but it was fun working with Kendall.”

Momager Kris Jenner was of course on hand for her daughters' event. Kris told Adam she couldn't be more proud of her girls, also admitting they don't turn to her for fashion advice, “Absolutely not.” Laughing, she continued, “They might ask Kanye but they're not going to ask me.”

Kris proving she's got her own fun fashion side on the cover of the latest Harper's Bazaar. The reality star agreed to pose on a knife thrower's wheel of death in hot shorts and a corset.

Adam asked how she felt being mounted to a bull's-eye, and Kris replied, “Apparently I wasn't thinking.” She smiled and added, “Well, you know just another day at the office.” 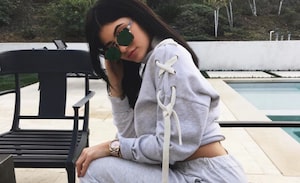 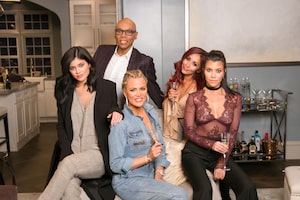 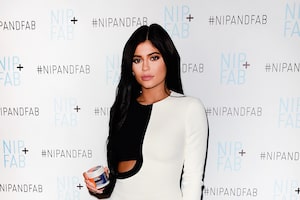